A Smart City May Become Smarter By Using Artificial Intelligence 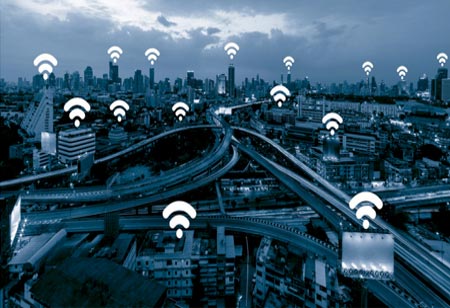 A city can be smarter by using data, technology, machine learning and artificial intelligence (AI) to create efficiencies, improve sustainability, create economic development, and enhance quality of life factors for people living and working in the city. Artificial Intelligence and Machine Learning algorithms have increasingly become an integral part of city administration, several industries and urban infrastructure. Now, they are making their way to smart city initiatives, intending to automate and advance municipal activities and police operations at large. Typically, a city when recognized as a smart city means that it is leveraging some kind of internet of things (IoT) and machine learning machinery to glean data from various points.

Machine learning is a method of data analysis that automates analytical model building. It is a branch of artificial intelligence based on the idea that systems can learn from data, identify patterns and make decisions with minimal human intervention. Artificial intelligence is a technology which enables a machine to simulate human behaviour. Machine learning is a subset of AI which allows a machine to automatically learn from past data without programming explicitly. The goal of AI is to make a smart system like humans to solve complex problems.

A smart city has various use cases for AI-driven and IoT-enabled technology, from maintaining a healthier environment to advancing public transport, safety and surveillance, parking, and lighting. By leveraging AI and machine learning algorithms along with IoT, a city can plan for better smart traffic solutions, making sure that inhabitants get from one point to another as safely and efficiently as possible. Machine Learning collects data from numerous points and conveys it all to a central server for further implementation, and once data is collected, it can be utilized in making a city smarter.

How city administration can solve urban issues with AI & Machine Learning
Machine learning generally takes the data generated by several apps such as integrated city portal, Health applications, mobile application, internet-enabled vehicles, devices, and smart cards and leverages it to identify patterns and learn how to optimize the given set of services. Its tools are able to personalize the smart city experience by aggregating information about the most used roads in a city and then apply it to a transportation system. On the other hand, machine learning and AI can be helpful in city surveillance, traffic management, water scada management, waste collection and its proper management & disposal, which is a vital municipal activity in a city, smart lighting management and others. The technology for smart recycling and waste management provides a sustainable waste management system. AI has the ability to understand how cities are being used and how they are functioning. It assists city planners in comprehending how the city is responding to various changes and initiatives.

In this way, AI-powered computer vision systems, for instance, could enable computers to spot millions of elements of urban life in a chorus, including people, public workers, cars, accidents, fires, disasters, trash and much more. The system allows not only for autonomous monitoring, but to make decisions based on the performance of each of these elements, changing behaviors over the course of each day or time, and responses to city systems by each element.

As AI and machine learning are transforming the way cities operate, deliver and maintain public amenities, the technologies come with some drawbacks. Thus, there is a need to consider about retrofitted solutions that can hold the smart city initiatives continuing. So, the current smart city programs using AI and ML seem to advance city services and lives, including transportation, lighting, safety, connectivity, and health services, among others.

According to the data published by the UN, the world population will reach up to a limit of 9.7 billion by the end of 2050. It is deduced that almost 70 percent of that population will be an urban population with many cities accommodating over 10 million inhabitants. As the number grows, we’ll have to encounter challenges regarding making a provision for resources and energy to all of the inhabitants, and at the same time, avoiding environment deterioration. Another critical challenge is administration and management to prevent sanitation issues, mitigate traffic congestion, thwart crime, and others.

Smart cities not only possess ICT, but also employ technology in a way that positively impacts the inhabitants. It is very useful for proactive policing in the city

But many of these problems can be tamed by the use of AI-enabled IoT. Using technological advancement to facilitate the new experience for inhabitants can make their day-to-day living more comfortable and secure. This has given rise to the concept of smarter cities. A smarter city is a city that makes use of information and technologies to enhance the quality and performance of urban services (like energy and transportation), thereby reducing the consumption of resources, prevents wastage, and overall costs. Smart cities not only possess ICT, but also employ technology in a way that positively impacts the inhabitants. It is very useful for proactive policing in the city. Not only predictive analysis, but also prescriptive analysis is also being carried-out by using AI tools at edge devices (Cameras and Sensors).

The Video Analytics offers a suite of analytics rules with Artificial Intelligence to provide automatic detection of a range of motion and non-motion behaviour of persons, objects and vehicles. There are provisions of Analytics and Artificial Intelligence through Machine and Deep learning solutions on video feeds received from number of cameras deployed in various cities.

AI also helps in Police Investigation Support like: Investigation Scene Rebuilding, Smart Archived Video Search, Vehicle Detection - defaulter use cases, Weapon Detection and others. According to me, we can visualize the world after 20 years in 2040 in five major areas –
• Entertainment: We can pick and choose hero and heroine as per our likes and dislikes in any movie. We can predict the several possibilities and multiple climaxes for any movie.
• Healthcare: Through AI, doctors can better analyze data and customize their healthcare to the genes, environment and lifestyle of each patient.
• Cybersecurity: AI-based tools look for patterns associated with malicious computer viruses and programs before they can steal massive amounts of information or cause havoc.
• Transportation: Driverless trains and cars in each city covering the whole world population, and on a lighter note, these AI drivers never look down at the radio, put-on mascara or argue with their kids in the backseat.
• Vital Areas: AI-assisted work may be even more critical in dangerous fields like mining, firefighting, clearing mines and handling radioactive materials.
Current Issue