Intelligent Machines Don't Rule the World - They Protect IT!

Within the lifetime of many of us, the idea that machines could learn things that humans didn’t specifically teach them was the stuff of science fiction. One skim through Netflix will uncover movies of evil computers plotting to take over the world. Isn’t it interesting that now when we have actual artificial intelligence and machine learning as part of daily life, one of its key purposes is protecting people and property? At Symantec, one of the largest cybersecurity companies in the world, we see over 10 trillion security events per year more than one million pieces of malicious code per day focused against consumers and the businesses and institutions that serve them. Since we don’t have one million cybersecurity experts to apply to that code, it has to be done by machines machines that learn from experience.

Take the much discussed driverless cars for example. Despite many high profile errors, more than 10 million cars with some self driving features will be on the road by 2020. In the UK, KPMG estimates that selfdriving cars will lead to 2,500 fewer deaths between 2014 and 2030. But where there’s digital automation, there’s the potential for hacking, and that’s where machine learning comes in. Using a process of anomaly detection, today’s computers can learn what’s ‘normal’ in a given car by simply monitoring the behavior of the vehicle. When an anomaly occurs, perhaps from outside malicious action, the car can react quickly and bring itself to a safe halt.

As Compute Power Has Dramatically Increased While Shrinking In Size, Increased Memory And The Quantity Of Data Available, Ai And Machine Learning Are Growing Exponentially

Consider also the industrial plants that play a significant role in our daily lives. We never think about the fact that our local water treatment plant, for example, is a mass of automation. Where there’s automation, there’s the chance for cyberattack and no one wants the water plant hacked! Today, any changes in the activity of the water system are generally detected by instruments based on technology that is decades old. But soon, industrial control systems will be imbued with machine intelligence that will allow the system to react far more quickly to even slight anomalies.

While the idea of machine intelligence is ancient, its real implementation is recent. As compute power has dramatically increased while shrinking in size, increased memory and the quantity of data available, AI and machine learning are growing exponentially. Every time we buy something online, make a deposit or take out money from an ATM, glance at an ad, or turn on the faucet, intelligent machines are protecting us. It may not be as great a story as machines ruling the world but it helps us all sleep better.
Current Issue 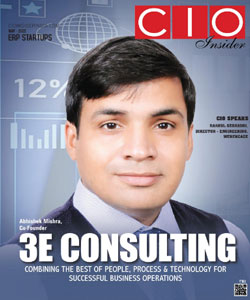