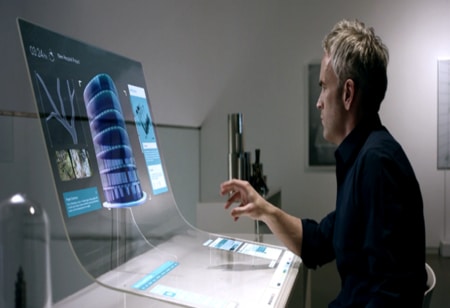 Back in the days LCD displays were looked at in amusement, which had replaced the huge projection in the backside of the TV or computer monitor with a plain surface. Now, it has become common in the latest products in display technology. The recent in the list of display technologies is the OLED that enables display panels that offer best image quality and free design as they can be made flexible and transparent. Since the entertainment value of people depends not just on the content, but also on the quality in which it is presented, the competition in enhancing the display setup has elevated.

Samsung has been investing in OLED displays over

the years in research and production facilities for replacing LCD displays in all mobiles. The company launched its first OLED TV in 2013 with a curved 55” OLED panel. With special focus on display technology, Samsung has been constantly developing innovations like curved, transparent as well as foldable displays. Though Samsung is on the race to conquer the space, LG Display has also announced that their new R&D centre will focus on the next-generation display panels that will incorporate researchers and developers from all over the world to bring a new narrative for visual experience.

Sony is on the field with its Crystal LED technology which proves that Samsung and LG are not just the players in the display technology field. Sony CLED is unveiling options that can get much better than the OLED panels in the list, by making it ideal for reproducing HDR images. It has not been very long since the state-of-the-art innovations in display technology started grabbing the attention of people. Today, OLED technology has not widely powered the office computers and display monitors. In another words, it would take much more time for MicroLED to get occupied in home and office rooms. Apple has started to use OLED displays for their higher-end smartphones and Apple Watches. Smartphone giants like Mi and Oppo are continuing with their competitive market with special focus to the display and price variations. Xiaomi’s transparent display-in-a-display has comprised technologies which are developed in-house by using a special low-reflecting glass with high transmittance.

By utilising smart display for home, office or individual purposes, the use cases differ according to the preference of the buyer. The ultimate choice lies with the consumer whether they need to make their life easier and smarter or not.