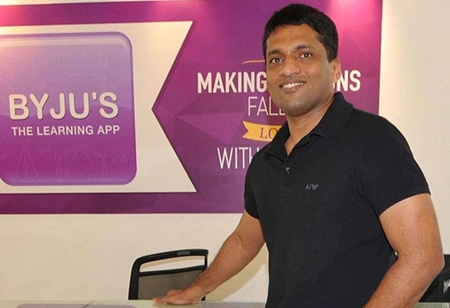 Bangalore based Edtech start-up BYJU’S raises $460 million during a Series F funding round led by MC Global Edtech Investment Holdings LP and which witnessed a participation of Facebook’s co-founder Eduardo Saverin’s B capital among other investors.

The round led by MC Global Edtech Investment Holdings, spent Rs. 1,628 crore ($225 million) for a 1.73 percent stake in the firm. B Capital currently has a 0.59 percent interest in BYJU’S, thanks to a combined investment of Rs.561 crore ($77 million) from two independent companies.

The investment priced the Bangalore-based Edtech firm at over $13 billion, according to regulatory filings, as it authorized the allotment of 1,40,233 Series F compulsory convertible preferred shares (CCPS) at a face value of Rs.10 and a premium of Rs. 2,37,326 per share, as per Entrackr’s report.

It proclaimed that the company was already in talks to raise $500-600 million from a group of investors, including B Capital, which will most likely be used to finance the $700-800 million purchase of Akash Educational Services.

This year marks BYJU’S first investment, while the last one was during a pandemic stricken 2020 that helped fetch more scope for online learning, where the company raised over $1 billion.

Measuring revenue, the firm had achieved a revenue run rate of Rs. 6000 crore last year, in which if the amount remained at that in FY21, it would have more than doubled in the year having posted a revenue of Rs.2,800 crore in FY20.

BYJU’S is on the run for acquisition. It paid $350 million to purchase a coding platform for WhiteHat Jr last year and had acquired a U.S-based Osmo for $120 million in 2019

The latest funding showed that the holding of BYJU’S promoters’ group, its Founder and CEO Raveendran including his family have dropped at 26.09 percent, is still higher than the founder’s shareholdings in other young Indian internet companies that have massive amounts of capital to stem their business.

Meanwhile BYJU’S is on the run for acquisition. It paid $350 million to purchase a coding platform for WhiteHat Jr last year and had acquired a U.S-based Osmo for $120 million in 2019. As per ET’s report the company is seeking to acquire Aakash Educational Services amounting from $700-800 million, a deal to be 70 percent cash and 30 percent stock.