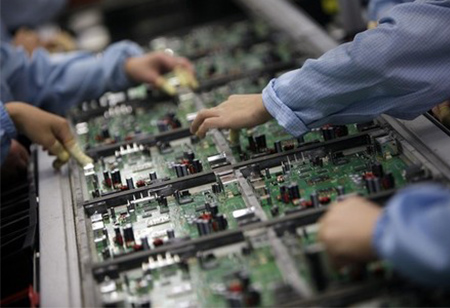 The Union Cabinet has notified three schemes that involve total incentives worth more than Rs 48,000 crore to boost the electronics manufacturing sector. The scheme also houses plans to create 20 lakh direct and indirect jobs by 2025.

components such as PCBs and photopolymer films and
assembly. It put forth a financial drivefor boosting domestic manufacturing and to attract large investments in the electronics value chain that couples electronic components and semiconductor packaging. PLI scheme is scheduled to avail applicable from August 1.

“To make India a huge hub for manufacturing, there are two long-term policy decisions being formulated by the government. At first, in the case of electronics, and second the pharma and medical devices. By approving production linked-incentive for electronic companies, we will give Rs 40,995 crore in the coming five years for production linked-incentive,” Telecom and IT Minister Ravi Shankar Prasad said.

In the last four years, the production of mobile phones in the country has surged eight-times from Rs 18,900 crore in 2014-15 to Rs 1.7 lakh crore in 2018-19. The SPECS, notified for manufacturing of electronics components and semiconductors, has a budget cost estimated of Rs 3,285 crore that is stretched over eight years. Whereas EMC 2.0 has formulated Rs 3,762.25 crore with an objective of creating jobs too.

The Cabinet estimates that PLI scheme, domestic value addition for mobile phones is expected to rise from the present level of 20-25 percent to 35-40 percent by 2025. As per the notification, companies that charge phones at Rs 15,000 and above and which makes a collective investment of Rs 1000 crore in the period of four years that starts with Rs 250 crore in the initial year, will qualify to avail 6 percent for the first two years. Manufacturing goods’ incremental sales for the base year has to be Rs 4,000 for these companies, during the initial year with sales amounting to Rs 25,000 crore by the fifth year.