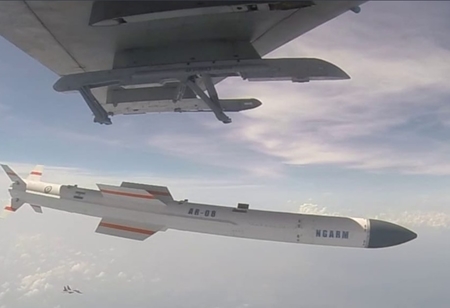 India is renovating its defense position and RUDRAM, the newly & indigenously developed Anti-Radiation Missile, is the latest addition to its armory. Developed by Defense Research and Development Organization (DRDO), RUDRAM is the country's first indigenous anti-radiation missile, which after successful flight-test now belongs to the Indian Air Force (IAF). The missile was launched from SU-30 Mk1 fighter aircraft. It comes as a belated 88th Air Force Day gift to the IAF.

The DRDO had also successfully flight-tested the Supersonic Missile assisted release of Torpedo, SMART on October 5th, which is a major technology breakthrough for stand-off capability in anti-submarine warfare. It had also completed the testing of laser guided Anti-Tank Guided Missile a couple of days back.

In addition to adding the first batch (five) of stellar Rafael Jets to its fleet, the defense department in the last month had also successfully testing the flight of made-in-India hypersonic technology demonstrator vehicle (HSTDV), with which the country joined an elite club of countries – the US, Russia and China, which possess the bleeding-edge tech.

An unmanned scramjet demonstration aircraft for flights with hypersonic speed, HSTDV is used as a carrier vehicle for hypersonic and long-range cruise missiles. The cruise speed of an HSTDV can be six times the speed of sound, while it can also reach an altitude of 32.5km in just 20 seconds after take-off.