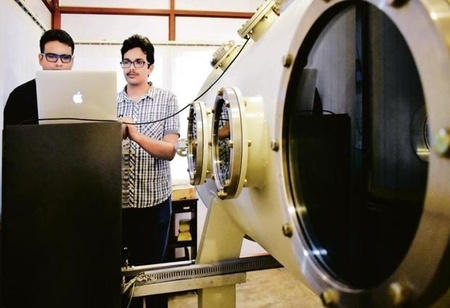 In the middle of a space revival, India is on top after the recent successful launch of the Chandrayaan2 mission by The Indian Space Research Organization (ISRO). From companies building palm-sized satellites to those aiming to launch satellites into space using cleaner fuels, a new wave of space technology startups are expanding in India, catching the attention of investors eager to join the space race. Therefore, India has already showcased its potential in the area of space technology in the recent years. Here are some startups that are revolutionizing the space tech of the country.

• Bellatrix Aerospace
Bellatrix Aerospace is a research and development company developing orbital launch vehicles and electric propulsion systems for satellites. It was established in the year 2015, this Mysore-based startup believes that a revolution in space technology is what it takes to change the world we live in. In the field of satellite propulsion, Bellatrix offers to reduce satellite mission cost through its patented electric propulsion systems. Bellatrix is dedicated to offer its customers high reliability, short wait periods and competitive costs.

Bellatrix is in the process of developing two rockets ‘Garuda’ and ‘Chetak’ which will use next-gen construction material such as carbon composites to make them low-cost as well as reusable. It has also patented an electric satellite propulsion system called Microwave Electro-thermal Thruster (MET), which it claims is more efficient than traditional chemical thrusters and lasts longer.

• Kawa Space
Kawa Space, based out of Mumbai, helps in building space products from scratch. It is built to take a space mission idea from end to end. The team lead India’s first private space mission, and won the contract to build over 27 satellites for ISRO. The team has helped everyone from tiny startups to Fortune 50 companies build space missions, from a simple technology demonstration mission to complex constellations.

• TEAMINDUS
TeamIndus has a very interesting founding story. The team had come together in the year 2010 with the aim of winning the Google Lunar X Prize competition, which was announced in 2007. Although the competition ended in 2018 without a winner, TeamIndus is still working towards developing and launching their lunar rover mission sometime in 2019. TeamIndus’ lander is code-named HHK1, and their rover is called Ek Choti Si Asha (ECA).

• Astrome
Astrome Technology was founded in 2015 and is a space startup by the Indian Institute of Science (IISc). The startup is fairly new to this league and aims to develop products and services which aid in space exploration.

Thus, India's space technology firms are part of a new breed of startups. Investors are paying attention, given the surging global interest in everything from space exploration to space vacations.