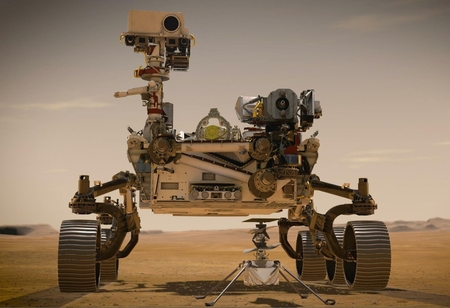 After sailing through space for seven months, NASA’s Mars Rover Perseverance landed safely on the Red Planet to begin searching for traces of ancient microbial life, making the landing a triumph for a pandemic weary United States in the grips of economic desolation caused by the COVID-19 public health crisis.

The six wheeled technological wonder, which is a part of NASA’s Mars Exploration Program, is the most advanced astrobiology lab ever. Perseverance came to rest about two kilometers from towering cliffs seated on the remnant fan shaped river delta of the crater and set up a prime spot for geobiological study on Mars, according to Reuters.

The spacecraft carrying the rover soared high into the Martian atmosphere at about 16 times the speed of sound on earth, angled to produce aerodynamic lift while jet thrusters adjusted its trajectory. Its descent was slowed down with the help of a supersonic parachute inflation which allowed the vehicle to fly to a safe landing spot.

The main objective of Perseverance’s mission on Mars is astrobiology and the search for signs representing ancient microbial life, in which the Rover will characterize the planet’s geology, past climatic conditions, make way for human exploration, and be the first to collect planet’s sediments.

The robotic vehicle travelled for nearly seven months, covering 472 million km before entering Mars’ atmosphere at 12,000 miles per hour (19,000 km per hour) to approach its landing on the planet’s surface.

Perseverance is a six-wheeled robot that weighs 1,040 kilograms, loaded with scientific instruments, advanced computational abilities for landing, and other new systems, which make it the largest, heaviest and the most sophisticated vehicle that NASA has ever sent to Mars.

A black and white aluminum plate has been installed on the rover called as the COVID-19 Perseverance Plate to pay tribute to the perseverance of healthcare workers across the globe.

The rover has over 23 cameras to help engineers portray a high definition view of the landing process. Another feature the rover comes equipped with is a tiny Helicopter named ‘Ingenuity’, which can fly on its own without any human assistance. It’ mission is also to test the first powered flight on Mars which in turn would help assist future Mars rovers.

Coming back to the rover, it carries a box-shaped tool built to extract natural resources so as to be of direct use to humans that may prove invaluable for future human life support on Mars and for producing rocket propellants to fly astronauts home.

A black and white aluminum plate has been installed on the rover called as the COVID-19 Perseverance Plate to pay tribute to the perseverance of healthcare workers across the globe.

Prior to Perseverance’s arrival on the Red Planet, Rover Curiosity landed in 2012 and continued its operation, soon followed by a stationary lander, Insight which arrived in 2018 to study the deep interior of Mars.

Wipro Places Tulsi Naidu on Board of Directors