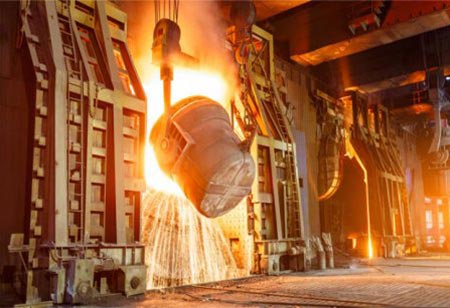 Bengaluru, India – December 09, 2019: Jindal Steel and Power Limited (JSPL), declared the nomination of Sudhanshu Saraf as the Chief Executive Officer (CEO) of Steel Business. The selection of Sudhanshu Saraf comes a day after the company announced the promotion of Naushad Akhter Ansari as joint managing director of Jindal Steel and power Limited.

As an industrial powerhouse, JSPL has a dominant presence in steel, power, mining an infrastructure sectors. JSPL’s has their business across the states of Chhattisgarh, Odisha and Jharkhand in India, and there the company operates some of India’s supremeand progressive steel manufacturing and power generation capacities of worldwide scale. Providing to India's development story, the business is taking forward adetermined global extension plan with its sights set on evolving

as a leading transnational business group. The
company continues to capitalise on occasions in high growth markets, increasing its core areas and spreading into new businesses.It has won several awards for its innovative business and social practices. JSPL has been regarded as the second top value creator all over the world by the Boston Consulting Group, which is the 11th fastest rising company in India and has assumed in the Forbes Asia list of Fab 50 companies. The company has also been entitled among the Best Blue Chip companies and they are rated as the Highest Wealth Creator by the Dalal Street Journal. Dun & Bradstreet has ranked JSPL as 4th position in its list of companies that produced the total maximum income in the iron and steel sector.

Sudhanshu Saraf as the new CEO will be in charge of domestic and international steel operations of the company with capacities of 10.6 MTPA spread across Odisha, Chhattisgarh, Jharkhand and Oman. He also have the responsibilities to take care of the mining business of the company and spread across Odisha and key international coal mining in Australia and South Africa.

“We welcome Mr. Sudhanshu Saraf in his role as Chief Executive Officer of JSPL’s Steel Business. Mr. Saraf’s deep understanding in identifying and deploying actions on System Constraints for maximizing benefit of existing systems will go a long way in realizing the continuous efficiency enhancement and operational excellence roadmap at JSPL”, Mr. N. A. Ansari, Joint Managing Director, JSPL said. “I see JSPL in a position of strength on many counts. I am excited about this opportunity to leverage.

Naushad Akhter Ansari, who was promoted from his designation as CEO of JSPL Steel Business and has been involved in leading the improvement of JSPL, its six million tonne per annum integrated steel plant at Angul was fully ordered and accomplished during his tenure as CEO. Before taking charge as CEO JSPL Steel Business, Ansari was active in completion and successful commissioning.