Who is Suresh Nanda? From Indian Navy to MNCs 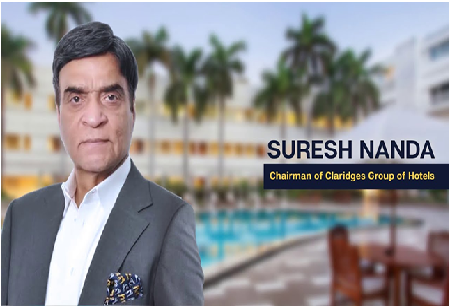 Following the footsteps of his father and a great soldier, Admiral SM Nanda, and with the spirit of serving the nation, Suresh Nanda joined Indian Navy as soon as he completed his schooling. With an illustrious 15 years long career, he retired from the Indian Navy to establish one of the first private firms in the repair and maintenance of foreign machinery in the defence sector in India. In those days, India was heavily dependent on foreign countries for military components and equipment so there was a need to develop indigenous technology for imported Indian military so that reliance on foreign countries can be reduced, the Crown Group was established in the year 1978.

Being an inveterate traveler, Suresh Nanda has been inclined towards hospitality industry. Once, while travelling to India in 1990s, he got an opportunity to enter the hospitality industry through the luxury heritage hotel that was then lying in despair. He says, “The Claridges Hotel in Delhi was on the block with the High Court of Delhi. I submitted a bid without knowing anything about hoteliering. To my utter surprise, I got a call from the High Court that “you have been selected as you are the highest bidder.” I came to Delhi and signed the contract, paid the outstanding bills and walked in to find Claridges in a debilitated state.”

Today, The Claridges New Delhi is one of the finest luxury hotels in India that is not only preserving its colonial heritage but is also offering ultra-advanced services to its clientele. Interestingly, it is also one of the few hotels in the country that is witnessing high occupancy rates amid the pandemic. Recently, while talking to the Businessworld, he said, “Our occupancy level is very high, and recently we had an occupancy level of 80 percent. The next in the city would be only 30 percent. That shows the confidence level that what we are doing is what the customers want and we are achieving results.”

After expanding footprints in the Indian hospitality sector, Suresh Nanda went on to become one of the first Indian international hoteliers by constructing the sumptuous Taj Dubai. Situated in the Business Bay, Burj Khalifa Street, Taj Dubai has become point of attraction amongst the international travellers. The magnificent hotel is the fusion of rich Indian heritage with the local traditions. He has been praised by the global community for the extraordinary work.

The Crown Group, on the other hand, has become one of the leading conglomerates in the Indian and global defence market. Recently, it had participated in the Aero India 2021, where it had unveiled an anti-drone gun amongst other indigenously developed technological innovations. The new weapon by the group is reported to have witnessed wide appreciation amongst the stakeholders. Intending to develop high-end cutting-edge indigenous technology in the defence sector, the Crown Group is growing rapidly expanding its wings across the world with the aim of not only ‘Making in India’ but, ‘Taking India to the World’.

Suresh Nanda is the chairman of the Claridges Group of Hotels and the Crown Group.