Vinit Kotawar: A Craft Setter Of Workable And Simple It Approaches

An MBA in Marketing, Vinit Kotawar donned the hat of an entrepreneur after he was driven by the strong will to take leadership roles. Being skilled in Sales, Marketing and Project Management, he co-founded Technokeens along with Anant Jadhav.

The IT field is one of the emerging markets in India today, when the country has more number of software and hardware developers contributing significantly to the growth of the economy. However, the industry which was once flooded with product based companies, has now evolved into a service based industry over the years due to the growing need to address issues that are hampering the sector in its journey to the new age technology era. Observing these needs years ago, Vinit Kotawar along with Anant Jadhav, zeroed in their focus to equip organizations with the best technical skills and bridging the gap for SMEs to adopt cutting-edge solutions.

There are numerous opportunities arising in the field of emerging technologies and a growing number of entrepreneurs are focused on developing software products. Having said, what made you invest thoughts and efforts to start off a venture in the IT domain?
It was in the year 2010, when Anant Jadhav and I were in the college enrolling for campus interviews that we realized it was not meant for us. Companies were expecting something industry or domain-specific, which unfortunately were not in line with our studies. I am of the opinion that, when it comes to practice, we were lagging behind the advancements happening in the technology field. This gave us the thought and idea of doing something different. After graduating from the college, we both started our new venture in Nasik that gave rise to Technokeens. During the initial days of establishment of the company we did not had a team. Later we realized that to sustain a business, we need to have a strong and adept team. In 2013, we were a team of 6 people, but now it has grown to 30.

Many people aspire about starting own company and being their own boss. Tell us how you lived the dream of becoming an entrepreneur turning the technology idea into a business on your own?
Today, the field of information technology has grown to become volatile. Everyone was looking to venture into a product based industry, but when it came to carry out specific services for the product they were not

able to maintain a team. To assist them in their product based business, we build a skilful team with appropriate infrastructure. From the initial years, we were focused on becoming a part of the service based industry which can provide for that much of products. This was something different from the then market situation and it has helped us a lot in capturing the intended market.

Being a company focused on providing all-inclusive web development services, tell us about Technokeens’ engagements centred on software development?
Today, there is a growing concern that no one is giving an error free solution that is core to a specific industry. In case of the manufacturing industry, two organizations may encounter issues that are entirely different. A single software solution cannot mitigate an issue for every industry. Therefore, we make sure to comprehend the problem and offer a customized tool to address the issue. For instance, once the PWD of Maharashtra had a problem with road estimation. We automated the problem entirely using the customized tool that won us Maharashtra Startup Week that year.

The streamlined approach in the process helped the company to save around USD 60,000 from a single project

This is the era of Industry 4.0 where big companies are depending on tools such as SAP Oracle database and ERPs. For small and medium scale industries to provide an edge in their specific domain, we are focused to design tools according to their needs.

Software development companies need to indulge in a consistent approach or method to design software as per the requirement. How does Technokeens help industries in preparing for Industry 4.0?
It is good that a lot many companies are adapting to Industry 4.0. We have started working with project consultants closely associated with government as well as manufacturing industries that face problem when it comes to Industry 4.0. While they gather data and analyse it, we assist them using small solutions which are launched step by step for people with lack of knowledge on tech. This initiative helps in equipping a proper streamlined approach into an

industry irrespective of what business they are engaged in. Moreover, this also assists organizations across different industry verticals to mark the incorporation of the new age technology in its business function. Please share one incident that you think paved base for earning heights in the IT field for Technokeens.
For a company which faced difficulty with contacting its hundreds of vendors to communicate about the delay in time schedules and shifts in days of work, we assisted its project manager with a portal where all the vendors and clients can be registered. In normal circumstances, project manager had to make calls and communicate the delay with time schedules. However, our portal helped the company to keep updated with their vendors on the project cycle and the work they are involved. It notifies each vendor about the time delays and the progress of the project. This helped the client to keep pace with the entire process and get instant knowledge about when to expect the delivery. The streamlined approach in the process helped the company to save around USD 60,000 from a single project.

Being a young entrepreneur in the IT field, what guidance would you give for the aspiring ones?
To the aspiring entrepreneurs who are focusing in the IT field, I would like to tell them to have a clear vision of what is required for the company, whether it is a service industry or a product industry. Sustaining in the field is the main key to success. We have examples of great entrepreneurs who have sailed across the difficult waves and sustained throughout their voyage to success. It is important to have a mental and physical capability to endure everything happens with the organization. If one can sustain the pressure, they should enter the stream to do great wonders to the organization as well as for them. 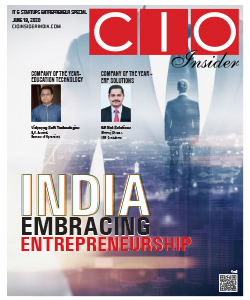