A New Civilization in the 'Clouds'! 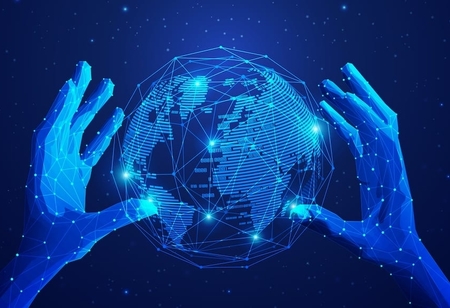 After almost five months of lockdown and a roller coaster ride of unprecedented predicaments, the subcontinent & its business world is gradually tuning into the new normal. In the process, it’s an undeniable fact that technology has overwhelmed us, transforming the way the world functions and proffering new dimensions to the millennial concept of Virtual World. From fulfilling the business processes as a team to doing transactions; and from having a social life to engaging in hobbies and entertainment, the pandemic marks the commencement of a parallel world through cloud computing - enabled by the internet and powered by an entire gamut of technology products, services, and platforms.

It only takes a glance to decipher the composition of this novel world. Let’s walk through the four major touch points.

It’s Raining Cloud Over Business Processes!
A recent study by Marketsandmarkets.com divulges that the current global cloud ERP market size of $45.3 billion is expected to more than double by 2025. Yes, you heard it right. While the report predicts a $101.1 billion future for cloud ERP, it also implies that one of the major driving factors will be the need for enterprises to improve the operational efficiency & streamline the business processes against the impact of COVID-19 pandemic. The exploding demand for leading cloud ERP platforms like Oracle ERP Cloud, Microsoft Dynamics 365 for Finance and Operations, and Acumatica Cloud ERP concur with this growing trend.

The recently made statement by Oracle CEO Safra Catz that divulges the 35 percent growth of its Fusion Cloud ERP, despite the one percent decline in the company’s overall revenue in Q4, is a strong testament to the fact that businesses are entering the fine tuning phase when it comes to setting up their office in cloud.

Adjoining this novel culture to forge a full-fledged business process ecosystem is Conferencing as a Service (VCaaS) platforms like JioMeet, which saw five million downloads within a few days of its launch.

A Sudden Turn to the Digital Payments Road
It’s not the best of times for digital payments. Then again, it is a ball game of the entire financial industry. The digital payments across sources such as airlines, tourism, hospitality, hotels, and non-essential e-commerce, among others have taken a nosedive; to say nothing of the restricted movement of goods and closed shops. But if we look beyond this, the proportion of payments through digital has transformed significantly, thanks to an inflated adoption curve created by online grocery stores, online pharmacies, EdTechs, online gaming, recharges, and utility/bill payments due to lockdown.

Unlike old times, the tracing back this upsurge doesn’t merely lead to the urban population. A recent report by IAMAI reveals that the Internet adoption in rural India has been growing rapidly in recent years and till November 2019, India had more internet users in rural areas (worth Rs.227 million) than in cities (worth Rs.205 million). The Covid-19 pandemic has been a long awaited spark to lead this transformation.

A Cut-Paste of Social Life
The lockdown imposed in many parts of the world has left people with no alternative other taking their social lives to the cloud. Remember the ban of TikTok in India came in like a bolt from the blue and it’s only fair to say that the action has dragged down the internet traffic on social media platforms a bit. With this, however, Facebook has become a monopoly in the segment with its Messenger and WhatsApp chat apps as well as Instagram, which has already launched a substitute to the Tik Tok through Reels feature. As people get a complete package, no wonder they strive to recreate their social life on the internet. According to Facebook, it witnessed a spike of more than 50 percent on its messaging products and now logs about 700 million daily calls across Messenger and WhatsApp.

OTT Platforms are the New Definition of Entertainment
The DTH industry has been on a free fall over the last few years, and pandemic has been a catalyst to this trend. The sources say MSO and DTH providers across the country have witnessed a 15 percent drop in subscriptions. The recent policy changes mandated by TRAI have also been of significant influence in this dip. However, this has paved the way for over-the-top (OTT) platforms. As per a study, Amazon Prime witnessed a 67 percent surge in subscriptions, while Netflix recorded a 65 percent growth in subscriptions. Compared to the previous year, Netflix’s revenue grew from $4.52 billion to $5.77 billion. The Amazon Prime’s membership sales have grown to $5.6 billion. It’s quite clear the way we are taking our entertainment needs to cloud.

While the end of the pandemic stays elusive, it’s a sure bet that we, whether we notice or not, are going to lead this parallel life in the cloud - from online-buying milk in the morning to watching your favorite Netflix show before sleep and with a lot more in the middle. A recent report from LogicMonitor, in the light of a poll of 500 IT decision-makers all over the world, states that 87 percent of them agree that Covid-19 has been a mighty catalyst for cloud migration and believe that within the next five years, almost all workloads (95 percent) will be in the cloud. If the trends are anything to go by, the scenario is not going to be much different when it comes to the aforementioned touch points. Hence, it’s more likely that the cloud civilization is poised to widen its scope in the post-pandemic scenario.