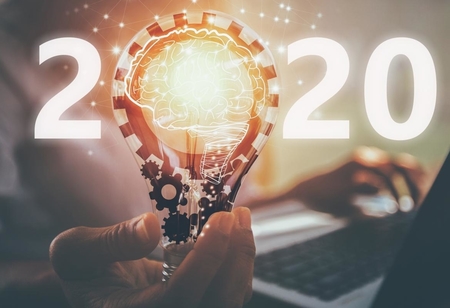 We are at the epilogue of 2020, one of the most eventful years in the history of mankind. The retail industries suffered the most due to, you know what. The pandemic, just like the ‘snap-of-Thanos’, turned a huge chunk of businesses across the globe to dust. But the technology industry, especially the digital one, manifested resilience like never before and came through in a stunning fashion. Let’s look at the positive turnarounds for a while.

The Anecdote of TCS
Tata Consultancy Services, India’s largest software company, made the country proud this year by becoming the most-valuable IT company in the world, surpassing Accenture for the first time in terms of market-cap. The company’s market value was clocked at $144.7 billion against Accenture’s $143.1 billion values, as on October 8 closing. TCS gained over three percent to close at Rs.2,825 as its board approved share buyback at Rs.3,000 per equity share. En route to the top position, TCS had also gone past IBM, which is closed sale with a market capitalisation of $119.46 billion. With this, among the listed Indian companies, TCS is only behind Reliance Industries in terms of market capitalisation. Reliance Industries’ market capitalization stands at nearly $215 billion.

But the joy was short lived, as TCS’ founder and the father of Indian IT Industry, FC Kohli
As FC Kohli passed on to the great beyond. Wipro’s Chairman Azim Premji, echoes the sentiments of thousands of people around the globe “Kohli was the true pioneer of Indian IT. We have all followed in his footsteps. His contribution to the IT industry and thus to India is immeasurable.” As Azim elucidates, we all have tasted the fruits from Kohli’s beautiful tree of success and the coming generations will continue to do so.


Pandemic Saw Six Unicorns
The Indian startup ecosystem also opened a mixed bag of joy and sorrow. The startups funding in Q3 2020 saw around $2.8 billion influx across 261 funding deals, which manifests a 167 percent surge compared to the previous quarter. While this implicates the revival of the ecosystem, it’s an even more inspiring fact that the country witnessed the emergence of six unicorns during the pandemic – fintech startups Razorpay, Pine Labs and Zerodha, tech startup Postman, ed-tech startup Unacademy and beauty and fashion startup Nykaa.

It also means that the year ahead, after having adjoined another dimension of technology inevitability, is going to unleash the Internet of Opportunities – like never before. An IDC report states that around 65 percent of global GDP is going to be digitized by 2022, driving $6.8 trillion of IT spending from 2020 to 2023. The data shows that around 75 percent start-ups are being successful in steadying the ship, while around 30 percent of startups have explored new revenue streams. The timely interventions of the Reserve Bank of India by bringing startups under priority lending sector and the Department for Promotion of Industry & Internal Trade by scrapping taxes on various kinds of investments are also aiding the ecosystem significantly.

With 5G rollout around the corner, edge computing is also set to become a top priority in the year ahead; not to mention Hyperautomation and AI Engineering

Hybrid cloud coupled with IoT is going to power the post pandemic tech-trends like Internet of Behaviors, which revolves around the idea of amalgamating data from both the digital and physical worlds to influence market behaviors through feedback loops, and Total Experience, which refers to mandating employee experience as another dimension of (customer) experience delivery through Intelligent Digital Workspaces.

With 5G rollout around the corner, edge computing is also set to become a top priority in the year ahead; not to mention Hyperautomation and AI Engineering. Above all, to combat security threats that have grown exponentially with the remote workforce model, Cybersecurity mesh, which allows the identity of a person or thing to define the security perimeter, is also expected to become a significant point of focus.