Ajay Banga To Step Down As Mastercard's CEO 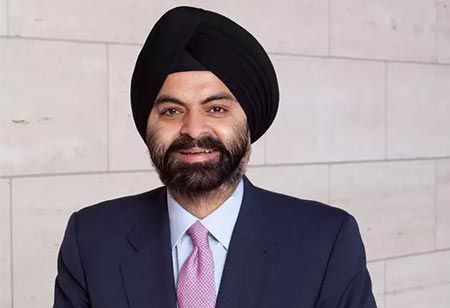 Bengaluru, India - 26 February, 2020: Mastercard’s President and Chief Executive Officer, Ajay Banga, will step down from his role in the start of the next year, the company said on Tuesday. He will assume the position of Executive Chairman of the Board of Directors, effective from January 1, 2021. The payment giant announced Chief Product Officer Michael Miebach as the new CEO.

“Thanks to the efforts of the entire leadership team of Mastercard, we are well positioned for future as our attempts to continue embracing emerging and new technologies are making devices fit for commerce,” said Banga.

Banga took charge of the company in 2009 and has witnessed the payment processor’s revenue triple in his tenure during the times when online shopping was gaining traction in the country. Prior to joining Mastercard, he was CEO of Citigroup Asia Pacific and has held a range of senior management roles

in United States, Europe, Middle East and Africa regions since 1996.

India-born Banga had been exercising as CEO for the payment giant for 10 years. He said that the company has been operating with a growth-oriented mindset and executing projects with a sense of urgency, contributing a CAGR of 13 percent from 2009 to 2019. He expressed that it has been a privilege for him to be a part of the transformation journey of Mastercard.

Michael Miebach, before joining Mastercard as President of Middle East and Africa in 2010, had served head positions at Citibank and Barclays Bank. Being the CPO of the company, he has led the Products and Innovation organization, including digital solutions, consumer credit and debit, and processing solutions. Miebach has been playing vital role in the company’s customer experience and design function, and also oversees Mastercard Labs.

Banga praised Miebach saying he has proven track record for managing business globally and building array of products. He also credited Miebach for his role in the multi-rail strategy that includes acquisition of Vocalink and the pending transaction with Nets.

“Miebach is a visionary who kick-started most of the financial inclusion journey that we had. I am excited and looking forward to continue working with him and support in the organization’s success after becoming the Executive Chairman,”, added Banga.

Miebach said that he is honoured to receive the opportunity in leading the company with a team by his side, and added that Mastercard bears excellent people, superior technology and outstanding potential.

Board members undisputedly elected Merit Janow as the Lead Independent Director, with effect from January 1, 2021. Janow will continue to serve as Chair of the Nominating and Corporate Governance Committee when Haythornthwaite, Mastercard’s present Chairman, retires.