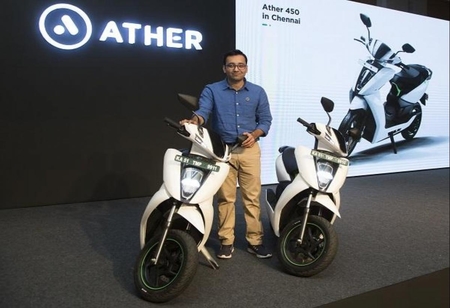 Ather Energy, a two-wheeler electric vehicle (EV) startup, plans to go public in 24 months, instead of the four to five years it had planned. In two years, the firm hopes to reach a revenue run rate of $3 billion, and it also hopes to be the first electric vehicle startup to go public with EBIDTA-positive financials.

Ather has also reached an agreement with Hero MotoCorp, its largest investor, which owns a 35 percent stake in the company.

Ather Energy was founded in 2013 by Tarun Mehta and Swapnil Jain, two engineering graduates fresh out of college with the daring to dream and challenge the well-established Internal Combustion Engine (ICE) by replacing it with an electric drive, according to its LinkedIn profile.

Ather is one of the few start-ups in India, particularly in the automobile industry, to offer goods and services that combine clean design and engineering - both hardware and software. Its Ather 450 product line, is India's first smart and connected electric scooters, since it believes that, that is where the future of personal mobility is headed.

Ather Energy, which is funded by Hero MotoCorp, announced a 12-fold rise in sales in October due to festive season demand. Last month, the company sold over 3,500 electric scooters, including the 450X and 450 Plus.

"The festive season has been quite positive for us, as Ather Energy had a 12 fold increase in sales in October compared to last year", says Tarun Mehta, Co-founder and CEO, Ather Energy.

It's also building a public fast-charging infrastructure network for electric two-wheelers in India called Ather Grid, which spans 22 cities and over 220 spots.

He went on to say, "in the last few months, demand has risen at an unprecedented rate, and we are really positive about the future of this upward trend. Consumers are swiftly recognizing the benefits of owning electric 2-wheelers and are now comfortably switching to EVs, which we are delighted with."

According to the company, it has been increasing its retail footprint across India's important cities, and it now has 22 experience centers in 19 cities, with ambitions to expand to 42 cities with 50 experience centers by March 2022.

It's also building a public fast-charging infrastructure network for electric two-wheelers in India called Ather Grid, which spans 22 cities and over 220 spots. By the end of FY22, it plans to open 500 more outlets.

The rapid charging network is free until the end of December 2021 for all electric two-wheelers and electric four-wheelers, according to Ather Energy.