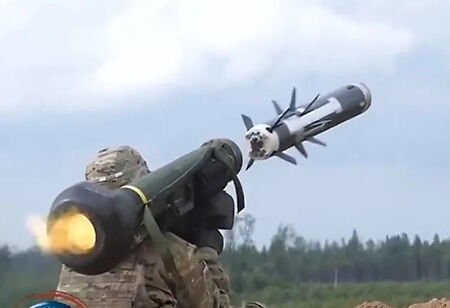 Described as a lightweight fire and forget missile, it was shot from a man portable launcher holding a thermal sight that enables it to be used in low visibility conditions including complete dark areas.

Launched by a two-man crew, the missile was fired at a target that was a replica of a moving tank.

“The missile impacted the designated target and destroyed it. The final impact event was captured on camera and the test has validated the minimum range successfully”, says DRDO.

The test was not only successful in meeting the mission’s objectives of annihilating designated targets, but also succeeded in validating minimum range.

“The present test was to prove the consistent performance for the minimum range… The missile performance has (already) been proven for the maximum range in earlier test trials”, states DRDO

According to DRDO, this test was to prove the consistent performance for minimum range.

This anti-tank weapon comes with a small Infrared Imaging Seeker glued with advanced avionics for onboard control and guidance.

This test is not the first as earlier tests were carried out which succeeded in performance for maximum range.

Welcoming the success as an important step towards self-reliance regarding defense system development, Defence Minister Rajnath Singh, congratulated DRDO on successfully testing for consistent performance of the anti-tank missile.

Another serve of congratulatory wishes was delivered by Dr G Sateesh Reddy, Chairman, DRDO, who appreciated the mission team on a historic flight test.

The MPATGM will now be mass-produced in India, obviating the need to import significant quantities of Spike ATGMs from Israel or Javelin ATGMs from the US, as was previously planned.

The test was unusual in that it was conducted to see if the MPATGM is effective against tank targets at the lower end of its range, which is 200-300 metres. The MPATGM has previously demonstrated its capacity to hit targets at its maximum range of 4,000 metres in previous tests.

According to the DRDO, ATGMs need 400-500 metres of flight to stabiliZe and deploy their guiding devices. The Army, on the other hand, insisted that the MPATGM be effective and precise at 200-300 metres.

“The present test was to prove the consistent performance for the minimum range… The missile performance has (already) been proven for the maximum range in earlier test trials”, states DRDO.