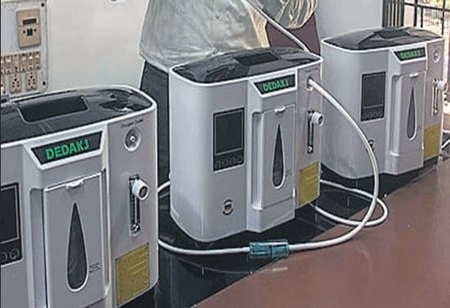 As hospitals across the country face oxygen shortages due to the more virulent second Covid-19 surge, homegrown fintech company Paytm is establishing oxygen plants in 12-13 cities.

Paytm's foundation will make donations to import these devices, which cost between Rs 50 lakh and Rs 1 crore per plant, and will provide them free of charge to government hospitals, according to Paytm founder and Chief Executive Officer (CEO) Vijay Shekhar Sharma.

The company expects deliveries within the next four to six weeks.

According to Sharma, the plants are being imported by Paytm foundation in collaboration with a number of organizations, including Elevation Capital and the American Indian Foundation. The fintech is in talks with state governments and hospitals to get permission to construct the oxygen plants.

He also stated that the second wave's widespread economic impact began to emerge in April, where the fintech firm, as well as other startups, prioritized the community's and employees' survival, according to Sharma.

Unlike last year, when companies were trying to figure out what was going on and how serious the virus was, Sharma felt that the current wave's effect has been totally unpredictable.

“Before we think about economic development, we must consider the long-term viability of our human forces, the people. We thought Covid-19 was sorted out this year and that vaccination will take care of the next steps, but the spread and a mutation that would take lives was unexpected", expressed Sharma.

Paytm had received Rs.9 crore in donations as of Sunday, with the company matching the contribution, where it brought the total to Rs.18 crore, as part of its ongoing campaign to import 21,000 oxygen concentrators.

In reality, several companies are focusing their efforts on resolving the nationwide oxygen shortage, where other homegrown companies namely Tata, Reliance, Zomato and even multinational companies like Amazon and Xiaomi are already supplying oxygen concentrators to drastically affected areas and hospitals in general.

Delhivery Delivering Logistics Support
Another firm has also joined the oxygen supply bandwagon, Delhivery, a logistics and supply chain startup, has already assisted in the import of 1,000 oxygen concentrators, according to co-founder Sahil Barua's LinkedIn article.

Last week, the company announced its plans to provide logistical support by managing the import of oxygen concentrators from China and which cited a shortage of air cargo capacity in India, especially from the neighboring country.

The same week a Delhivery spokesperson said that the company was offering urgent and subsidized logistical support rather than importing the material itself.

The material was imported on behalf of a number of organizations, including food delivery app Zomato and Action Covid-19 Team Grants (ACT Grants), which recently announced a campaign to collect Rs.75 crore for home health care, oxygen solutions, vaccines, and medical workforce supplementation.

“Before we think about economic development, we must consider the long-term viability of our human forces, the people. We thought Covid-19 was sorted out this year and that vaccination will take care of the next steps, but the spread and a mutation that would take lives was unexpected", expressed Sharma.

Apple to Manufacture iPhones in India

Signzy Raises $ 26 Million in Funding Round