Samsung's Next : A Second Foldable Phone 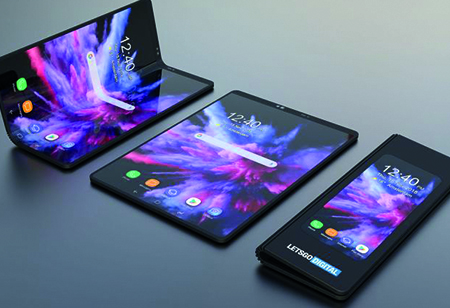 Samsung Electronics Co. is preparing to unveil its second foldable device early next year, a luxury phone that folds down into a compact-sized square. Earlier, Samsung’s first foldable phone launch turned out to be an embarrassment for the company, which had to admit its original final Galaxy Fold design was a disaster. Even so, Samsung patched up the Fold, supposedly fixing the design issues that broke the screen during early tests. Now, the company is marching towards a new release date. Regardless of how the Galaxy Fold does in stores, Samsung isn’t giving up its dream to make more foldable handsets, and the company is now working on a new foldable design that could be genuinely appealing: A Galaxy Note 10-like device that folds into a square.

More so, the South Korean smartphone giant is now working on a device with a 6.7-inch inner display that will fold into a square. Sources say that the device bends inwards, similar to clamshell phones. Furthermore, Samsung is also expected to

make the foldable device thinner and more affordable. The success/failure of Samsung Galaxy Fold will decide the future of Samsung’s second foldable smartphone. Interestingly, the company has also partnered with designer Thom Browne for the upcoming foldable phone. The company wants to cater to the style sensitive and luxury audience who look beyond device specifications. For the techies, the company will have the appeal of cutting-edge display technology and the nostalgic appeal of rejuvenating the flip-phone form factor. But, the company declined to comment on the development of unannounced products.

“Believe me, the most creative Samsung smartphone in the second half of 2019 is not Fold or Note 10, you just have to wait, don’t ask me more,” Ice Universe said on Twitter.

Moreover, according to one person familiar with the device, the new foldable phone will have a hole-punch selfie camera at the top of the inner display, just as on the recently released Samsung Galaxy Note 10. On the outside, it will have two cameras that face the rear when the phone is open or the front when it’s flipped closed.

Additionally, bearing the codename “Winner,” the Galaxy Fold was supposed to be the symbol of Samsung’s innovative edge and leadership this year. However, the first mass-produced foldable captured smartphone fans’ attention for the wrong reasons, as reviewers quickly found the flexible display couldn’t withstand even a few days of conventional use. Pushing back the original April launch to this month, Samsung now promises that its redesigned Galaxy Fold -- with a new protective film that wraps around the screen and flows into the bezels -- is ready to go.

Yet without expanding to new markets or product categories, Samsung’s flagship phone sales have recently been slumping, and the company is looking for foldable to be its next big growth engine. Fierce competition from Huawei has eroded Samsung’s longstanding lead as the world’s biggest seller of phones, and the latter was threatening to surpass Samsung until U.S.-China trade clash knocked it off course.