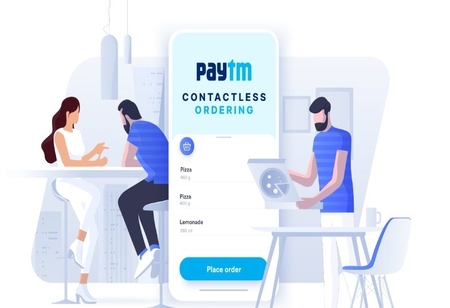 The joint venture of Tata group and American multinational chain of coffeehouses and roastery reserves Starbuck - Tata Starbucks, has set foot on a pan-India partnership with digital payments firm Paytm, to build a contactless dining solution. This is confirmed by internal people aware of the matter
Starbucks will deploy Paytm's digital ordering solution across its 180 stores, with the solution already live in stores in Bengaluru.

Through adoption of Paytm’s ‘scan to order’ contactless dining solution, the coffee chain brand aims to promote social distancing in its outlets and scale this solution across top metros including Mumbai, Gurugram, New Delhi among other cities, according to one of the persons quoted above.
Currently, restaurants across the board are devising new plans to draw consumers in after a protracted lockdown that impacted several businesses severely. Even as restaurants have resumed operations, the number of diners they can accommodate is currently capped.

This has prompted restaurants to encourage takeaways and strengthen partnerships with online food aggregators and payment partners to ensure consumers have minimum point of contact with their services.
Starbucks and Paytm declined to comment on the development.

Paytm had launched its contactless dining feature for restaurants in April. Through this partnership, customers can scan the QR code placed on every table in a Starbucks’ outlet, post which menu options appear on the Paytm app. Customers can then place and pay for the order digitally through payment methods including Paytm Wallet, Paytm UPI, net-banking, and cards.
“Starbucks has usually been shy in partnering with digital payment firms, and this partnership will help Paytm quickly scale up its contactless-dining solution, as it looks to compete against a similar solution from Zomato," said one person mentioned above, asking not to be named.

Through its ‘scan to order’ solution, Paytm also enables customers to pre-order their beverages before reaching restaurants, through their ‘Order Ahead’ feature.

In May, Tata Starbucks said it is opening up for takeaway service across select stores in cities of Mumbai, Pune, New Delhi, Gurugram, Bengaluru, Chennai, Kolkata and Surat. This is in addition to the home delivery service, which it resumed in April.

Food aggregator Zomato was one of the first in the market to launch its contactless dining solution in April.

Around mid-May, the National Restaurant Association of India (NRAI) had partnered with Dotpe, to launch a digital ordering solution for restaurants to ensure minimal human touch while ordering and settling the bill. Now, Paytm is also said to be working with NRAI for placing its contactless dining solution in restaurants across the country, according to another individual aware about the discussions.