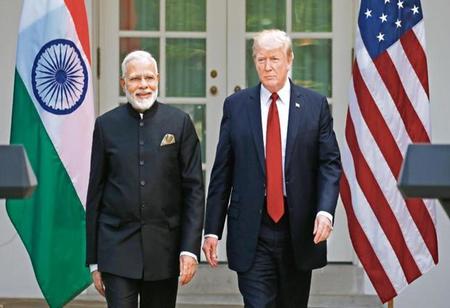 Bengaluru, India - 25 February, 2020: The President of the United States, Donald Trump, announced to seal multi-dollar defence deals with India in Delhi on Tuesday while addressing the crowd at Motera Stadium in Ahmedabad. He said that the U.S is looking forward to providing India with the most feared and premiere military equipment on the planet.

Trade deals and talks between the two nations have been stuck for a while regarding the medical devices price controls, agricultural tariffs, and India’s intellectual property law with provisions like compulsory licenses. However, last week India’s cabinet cleared USD 2.6 billion purchase from Lockheed Martin Corp. of 24 multi-role MH-60 R Seahawk maritime helicopters to Indian navy. Donald Trump’s visit to India also highlights another contract of six AH-64E Apache helicopters for USD 800 million from the U.S.


As per the U.S Defence Security Cooperation Agency, the State has also approved for USD 1.8 billion in arms including air-defence radars and missiles, rifles and other equipment. The first official state visit of Trump to India is a two-day trip that officials claim is aimed to reset the relations that have been in trouble over trade spat.

“We are in the initial stages of discussion for an incredible trade agreement to reduce barriers of investment between the countries,” Trump said. He added that he is optimistic about working with Prime Minister Narendra Modi to reach a lucrative deal that benefit both India and U.S.

In prior to Trump’s India visit, the U.S backed off from signing a trade deal with India. Indian officials were tight-lipped over the U.S’s move, which both sides had earlier worked hard for a mini-deal. Sources confirmed that it was U.S which pulled the brake, wanting to go for a bigger and more ambitious deal. Resolving the trade knot that has made both countries to impose retaliatory tariffs remains elusive to experts. Official from both sides have reiterated that any further progress is unlikely to be made until after the U.S election.

In his speech, Trump stressed that he pledges to make a significant trade deal with India. Addressing a large crowd, Trump called Modi a “true friend”, touted the bond between the two countries and expressed the desire to strengthen the bond. Thousands of people were gathered on the streets to watch Trump’s motorcade transit that led to the ‘Namaste Trump’ event on Monday. The U.S President complemented India’s contribution to culture and also took the opportunity to mention about the low U.S unemployment rate and his efforts to reform the American military.

Trump later told reporters aboard Air Force One that he was in no rush to secure a trade deal with India. “We are doing well with India, we are making deals”, Trump said.