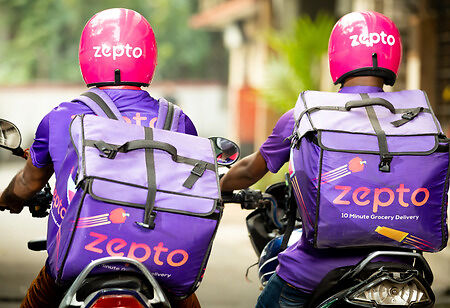 10-minute grocery delivery startup, Zepto has raised $ 200 million as it attempts to expand its business to more cities across India and grow its network of dark stores, through a new financing round valuing the firm at $ 900 million.

Additionally, the funding would also help Zepto compete with companies like Dunzo, Swiggy, Zomato, Amazon, and Flipkart, which are all spending big on the country's quickly rising online food sector.

The company has secured $ 360 million in total from well-known investors internationally and nationally. In just a few months, the company claims to have established an all-star bench of executive talent and expanded its team to over 1,000 individuals. The funds will allow it to continue hiring across all departments, including engineering, analytics, operations, marketing, finance, and human resources.

What sets Zepto apart, according to the company, is its capacity to regularly supply over 3,000 products in under 10 minutes. The goal is to establish 10-minute delivery as the new standard.

Zepto is one of the first firms in India to try to validate the quick commerce concept, which has taken off in a number of markets, including North America and Europe. However, as many venture capitalists lose interest in speedy delivery, a number of firms in the field have either pulled back or shut down completely.

On another note, Zepto is testing a 10-minute delivery service for coffee, chai, and other café goods in select Mumbai neighborhoods. The company claims that the new category, dubbed 'Zepto Café,' is being favorably embraced by early clients, and that if the experiment goes well, Zepto wants to expand the service across India soon.

Other companies, like Blinkit, formerly known as Grofers, are also vying for a piece of the pie. The SoftBank-backed startup recently accepted a larger meal delivery company Zomato's takeover offer.

According to research firm RedSeer Consulting, e-grocery platforms can cover more than half of India's $570 billion grocery retail market. Millions of dollars are being invested in startups and businesses that are tapping into this market.

Currently, Zepto's model forecasts that the majority of possibilities will be found in the top 30 densely populated cities. These cities include not just metros but also Chandigarh, Kanpur, and Ahmedabad.