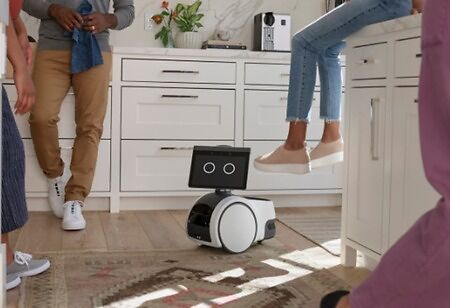 Looks like the Jetsons (a popular American animated sitcom) family lifestyle could much become a reality someday, minus the living in space part, although that could happen in the future. Amazon is typically known for selling appliances and gadgets suitable for households and yes, it did launch a robotic pet-like has got most technology innovations covered on the house, including a few for the kids and a service for the elderly folk.

Is that a Mini Wall-E in the House?
Well, it may resemble much like Disney Pixar’s Wall-E character, except for the cleaning part. This Wall-E right here which goes by the name, Amazon Astro, is induced with Alexa and AI capabilities. Astro is a robot pet sporting a periscope camera live feed support, Ring Protect Pro support, and more. What’s more interesting than delivering items on call, is that Astro can beatbox and can quite be autonomous as the bot can roam around the house without any commands or orders including pre-set routes. In fact it can see, hear, understand and act on its own as well. However, it’s not easy to get Astro home, since the bot is not that friendly with stairs, and therefore, it’s been said that the e-commerce giant has a set of questions, especially one that asks about the kind of stairs that a house has. Based on the passing of those criteria, Astro can become another member of the family, friend, pet, etc.

But the e-commerce giant is said to introduce another Astro later, calling it to be much smarter than the first one.

Goodnight is the Spell for Adjusting Temperatures
The e-commerce giant has a lot of devices integrated with Alexa this time and the Amazon Smart Thermostat is also induced with an Alexa. Partnering with HoneyWell Home, the thermostat is compatible with existing Hvac systems and is capable of automatically sensing situations and adjusting the temperatures accordingly. Even a command such as ‘Goodnight’ is enough to regulate the temperatures in the house and can reduce energy levels on the go.

Always Home Cam is Finally Out!
Although this is not new, the e-commerce giant is finally inviting orders for those who require a security check when they are not at home. Equipped with a 2K camera, the device can capture videos and can fly around the house for a few minutes before returning to its charging station. The drone is made for the very purpose of surveilling the house without a multi-indoor security camera setup. It can work on a single floor, but the unfortunate part is that it comes with a five minute battery life.

Hey Disney, a new service from the corporation, will allow customers to engage with their favorite Disney and Star Wars characters in the near future

Along with drone cam, the e-commerce giant released a bunch of other security Ring products such as, Ring Alarm Pro and Ring Virtual Security Guard.

A Security Subscription Service for the House during Vacations
Thanks to the built-in TrueMesh eero Wi-Fi 6 router for stable communication, Amazon's latest base station delivers additional security features. Ring Virtual Security Guard, a subscription service that hands-offs monitoring of your video feeds to a professional security company, is another alternative for owners. This would be perfect for while you're sleeping or your family is on vacation.

Aside from Ring, the e-commerce giant has also been working with Blink regarding the creation of a new doorbell.

Answer Doorbells with a Smartphone
Aside from Ring, Amazon also has Blink, which sells smart video cameras that can be installed throughout the home. Blink is now releasing its first video doorbell, which can be wired or powered by batteries. When used in conjunction with the Sync Module 2, which also provides local storage through a USB drive, the Blink Video Doorbell can survive up to two years on battery power. The original Blink doorbell, like Ring (both Amazon subsidiaries), allows the user to answer their door using your smartphone. Alexa, Amazon's smart assistant, is also compatible with the Blink Doorbell.

Blink also unveiled a new Floodlight Camera and a solar-powered attachment for the Blink Outdoor camera.

One for the Elders
Amazon has launched ‘Alexa Together’, a new subscription service for families with senior relatives who are still living independently but may want extra help. According to Amazon, caregivers can use their devices to create reminders or connect to a music service so that their loved ones can simply listen to their favorite songs. They can also add contacts to the Alexa account of a family member so that they can call friends and relatives without picking up the phone. The new subscription also includes an immediate response option, which allows users to contact an emergency helpline without having to dial a number. If an elderly family member falls ill or has another emergency, and can simply ask Alexa to summon help.

Two for the Kids
Amazon Kids+ now has additional new content, including programs and games. Do Re Mi, Arpo, Super Spy Ryan, Blippie's Treehouse, and Monkie Kid are among them. After adding Shaquille O'Neal and Melissa McCarthy to the Alexa voice assistant, Amazon is now adding more real-life personalities. Hey Disney, a new service from the corporation, will allow customers to engage with their favorite Disney and Star Wars characters in the near future. In addition, the assistant will provide trivia and humor.

Up next is the Amazon Glow is a new device with a built-in screen and projector that provides an immersive experience for kids. The youngsters may see their parents, teachers, and guardians on an 8-inch LCD screen, while the projected image below serves as a second interactive screen.

A Photo Frame When Inactive, But a Chore Tracker When Activated
The new Echo Show 15 is Amazon's largest smart display, which also functions as a digital photo frame that can be mounted on the wall. It comes with Amazon's new Alexa widgets to help the user stay on top of household chores. It will display contextual information based on the family members it recognizes in this manner.

Amazon also revealed new AI developments, including personalized events based on sound and visual input. Devices can detect specific noises, such as an appliance blaring, or notify the user if they left the garage door open, in this way.

Track Activities with Halo View
The Halo View is close to Amazon's Halo, and it has a display and a seven day battery life. It includes a variety of leather, metal, and other bands. It will include heart-rate tracking, Halo Fitness training routines, and a Halo Nutrition tailored meal planner, among other health tracking features.