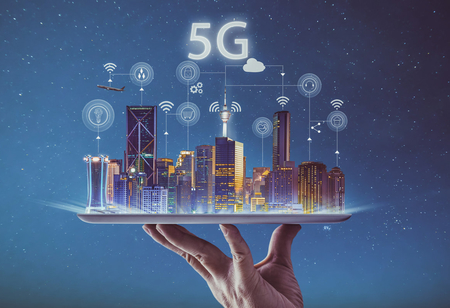 India is yet again at the cusp of another digital revolution, with the bidding for the 5G spectrum auction scheduled for March 1st. Airwaves worth Rs.3.92 lakh crore will be up for sale, and a total of 2,251 MHz spectrum in seven bands (from 700 MHz to 2500 MHz) will be auctioned. The new 5G rollout is more important considering the fact that India, a country with so much potential & resources, has missed out on such decisive opportunities in the past – like the way we played the role of a mere supplier of raw material for the British industries during the first Industrial Revolution, which in truth shaped up the GDP per capita of several western economies. But this time, India holds in its hands a real opportunity to take a full swing at this novel revolution in the making.

India Inc. is likely to generate new avenues of growth in the digital realm, bolster industrial productivity, and bring a tangible change to the socio-economic fabric of the country. The words of Mukesh Ambani while elucidating Jio’s 5G plans substantiate this fact. “Jio will pioneer the 5G Revolution in India in the second half of 2021. It will be powered by indigenous-developed network, hardware and technology components. Jio's 5G service will be a testimony to your inspiring vision of Aatmanirbhar Bharat,” Ambani said while speaking at the India Mobile Congress.

India is the world’s second-largest telecommunications market with 1.16 billion subscribers and has registered a strong growth in the last decade.

While the rollout itself is poised to present an abundance of opportunity, not to mention the 10 Gbps speed of 5G networks that will revolutionize user experience and less than one millisecond latency that will transform the opportunities involving IoT and Edge Computing. This is exactly why India is believed to be a digital economy that has the potential to reach $1 trillion by the year 2025. For instance, GX Group, a European network solutions company is leveraging the novel opportunities in the Indian market by channeling the network boom their way.

Lend your years to Paritosh Prajapati, CEO, GX Group. “We, in fact, are currently working on new products based on AI to ensure seamless operations for the operators and ascertain higher availability, which will further help rural areas to manage the networks better. In the coming years, we will witness the Next Wave of Digital India, in the aftermath of lockdown and social distancing. In 2021, we are expecting to witness an explosion in both internet adoption rates and frequency of usage, creating the world’s largest digital adaptation.”

Currently, India is the world’s second-largest telecommunications market with 1.16 billion subscribers and has registered a strong growth in the last decade. The number of internet subscribers in the country increased at a CAGR of 21.36 percent from FY16 to FY20 to reach 743.19 million in FY20. According to IBEF, over the next five years, rise in mobile-phone penetration and decline in data costs are poised to add 500 million new internet users in India, creating new avenues for businesses. India is definitely taking a full swing at it this time.