A Decade of Intel's Thunderbolt Tech 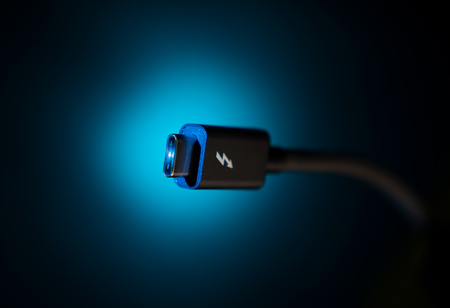 Winding back a decade, computers had numerous, more often than not, separate input/output (I/O) ports to connect different kinds of devices and wires. Most of us remember the back side of our desktops looking like messy morning hair. There were USB ports for data transfer, Ethernet ports for internet, different ports for display unit, including HDMI and VGA ports. Well, often times, those weren’t enough to keep up with the ever advancing needs of the user.

Intel, in truth, put a one-time end to this crisis by introducing ‘Thunderbolt Technology’, a single connector that helped move data faster and safer among connected smart devices like PCs, docks, monitors, solid state drives, external hard drives and cameras. Back then, downloading movies or songs seemed like a big deal as it was a complex and time consuming process. Thus people were in constant look out for transferring media between devices. With the advent of Thunderbolt that process became smoother and especially less time consuming as it was capable of completing a transfer of a full-length high-definition movie within 30 seconds and could back-up a year’s full MP3 music playback in just 10 minutes.

Ten years have passed since then and in all those years Thunderbolt underwent a lot of changes to become what it has become today, ‘Thunderbolt 4’. It has increased four times its overall bandwidth of and now can even multitask by charging a notebook while supporting two 4K displays. It has even turned into an even smaller Type-C connector, and it can dock lighter and thinner notebooks and single-cables.

Ten years have passed since then and in all those years Thunderbolt underwent a lot of changes to become what it has become today, ‘Thunderbolt 4’

“Thunderbolt’s simplicity, reliability and performance are important whether you are working or learning at home or you are creating content or you are a gamer. You can do all those things with a single Thunderbolt connection,” says Jason Ziller, General Manager, Client Connectivity division at Intel, while commenting on the anniversary.

Thunderbolt has been integrated in Intel CPUs and its protocol has been contributed as the USB4 standard which led to its promotion as an industry standard. It plays a vital part on Intel Evo and Vpro laptops and is supported via all leading computer operating systems and yet to be launched Chrome devices.

“Intel looks forward to continuing to work with the industry on innovation and adoption of Thunderbolt. We expect Thunderbolt to keep up with monitors as we look to 8K and 16K, external SSDs that are nearly doubling in speed every year and much more”, added Ziller.

Thunderbolt’s name and logo can be used only when a company has passed a certification test that comprises electrical and functional testing to make sure its device works the way it's expected to. As a matter of fact, Thunderbolt has certified more than 1000 computers and 1000 accessories in many different categories showing the breadth of its adoption across the industry.