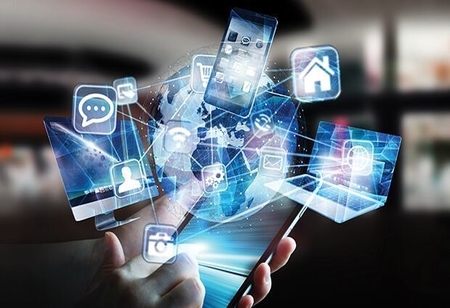 At times when the entire economy is shaking due to Coronavirus, technology business is standing tall.

Recently, Amazon said that it was hiring 100,000 warehouse workers for fulfilling the surging demand. Facebook Chief Executive Mark Zuckerberg said that video calling and messaging traffic is rising rapidly, and Microsoft said that the numbers for online collaboration software jumped up to 40 percent.

People are working from home to maintain social distancing and are using technology from world-class companies.

Amazon with its years of brick and mortar retailing is now seeing customers buying everyday grocery and medicine from the online store.

Even online streaming services by Netflix are keeping movie theaters empty. Also, these are already closed by the government orders and so, Netflix and YouTube are getting the audience number increased each day.

Dumping data centers to rent computing from Amazon, Microsoft and Google were already in process, and now companies have made acceleration in the shift to make millions of employees as they are working from home.

Famous companies like Apple that once depended on Chinese factories and consumers are working normally with people spending more money and time on digital services. This Wednesday it released a new gadget also.

Daniel Ives, Managing Director of Equity Research, Wedbush Securities said, “The largest tech companies could emerge on the other side of this much stronger.”

However, major technology companies should not get worried. Even advertising of Google and Facebook are suffering in economic sloth. Apple, Microsoft, Amazon, Facebook, and Google’s parent company Alphabet have cumulatively lost $1 trillion + in the market value a month back when U.S. stock traded at record highs. Microsoft and Apple have cut their short-term financial forecasts as a result of decreased consumer spending.

Apart from the top companies, the struggle is there for other companies. Companies like Zoom – the videoconferencing service provider, Uber and Lyft – cab speeders, and property-rental platforms like Airbnb have witnessed loss in customers.

The global technology industry which is about $3.9 is predicted to suffer this year with unknown reasons. On December, IDC research firm forecasted there would be 5 percent worldwide growth for sales of hardware, software, and services in 2020.

A few months earlier it became clear that the coronavirus would disrupt the supplies and prohibit sales in China, and relating to which IDC said annual revenue might grow at one 1 percent. However, during the pandemic times, this 1 percent is actually optimistic as per Frank Gens, Chief Analyst, IDC.

Economy improvement is related to changes of customer behavior and it can benefit the big tech companies from that. With severe criticism from lawmakers, regulators, and competitors before the start of pandemic in the U.S., 18 months ago, the biggest companies are predicted to have strong hold than ever.

Amazon has changed the shopping paradigms of customers as they are buying groceries online. An

improvement retailer of Lowe’s in Charlotte, Michael Crowe said he ordered groceries from Amazon for the first time a day back as he avoided going out and buy from a supermarket. He stated, “Probably I would be buying online even when lockdown is called off.”

With customers engaging on different services offered by Amazon, it is likely to have a shift on online buying said by Guru Hariharan, Founder, CommerceIQ. Hariharan, who is an ex-Amazon employee, has prepared an automation software which is used by renowned brands like Kellogg’s and Kimberly-Clark.

Amazon’s senior vice president for worldwide operations, Dave Clark in his last week’s blog post said that Amazon is creating new jobs in the U.S. warehouses and delivery network as labor is maximum at this time of the year.

Customers are buying a variety of goods from Amazon which has created this demand. Cold medicines were getting sold at ninefold from the last year’s count and dog food orders at thirteen-fold. Paper towels and toilet paper sales got tripled as per CommerceIQ.

However, Netflix didn’t comment on the increase in subscribers’ base.

European government officials called Reed Hastings, Chief Executive for asking if Netflix could reduce the video streaming quality for giving space to the region’s internet network, to which the company agreed for a span of 30 days. YouTube agreed to suspend streaming of high definition video in Europe for one month.

Facebook and WhatsApp messaging applications’ voice calling over feature had twice the number of users compared to normal days. Zuckerberg on Wednesday in a conference said that and informed Messenger had similar growth. He stated, “This amount of spike in users’ number happen on during New Year’s Eve.”

Analysts are bullish about Facebook’s claims as many people turning to Facebook for news.

From an analyst’s notebook (Wedbush Securities, Michael Pachter), “Our belief is that Facebook users are accessing its properties at meaningfully rising levels in the past weeks.”

The topmost cloud computing platforms – Amazon, Microsoft, and Google are having inflow of cash and offering discounts for renting the underlying infrastructure for a corporate network and software used by employees.

Microsoft has pushed the new business messaging and collaboration tool, Microsoft Teams that compete with the independent company Slack. Yesterday, Microsoft said the users’ number on Teams grew 37 percent in one week to 44 million+ daily users. A minimum of 900 million meetings and call times on Teams are happening every day.

The Corporate Vice President of Microsoft, Jared Spataro said, “The unprecedented move of work from home culture will change how we work and learn.”

Apple’s sales also increased barring in China even when the hundreds of stores are closed.

The Head of Foxconn (assembler of most of the iPhones), Terry Guo said, “On March 12 Foxconn’s Chinese factories were resuming production before schedule and going back to normal.”

From device sales, Apple has moved towards selling services like apps and subscriptions to music and TV. It is a piece of good business news in the United States and Europe as people are staying locked at homes. Data says that people are spending time in watching television, and so Apple is spending billions of dollars on original programming for the Apple TV Plus service from where it hopes to have audiences with $5 monthly subscription.

Time and money are spent on phones is always better news for Apple and Google as they cut off most app sales.

Ives from Wedbush said that after the financial crisis in 2008, Apple grew stronger and now there is no reason it and others can’t exhibit the same again.