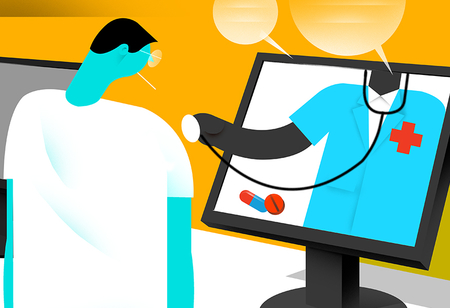 India has a unique geography. Since many small towns are geographically isolated, there are fewer health services available for many patients across the length and breadth of the country. The extension of medical services in these areas can be severely impaired by infrastructural restrictions. Since there are far fewer patients in a town than in a metropolitan hospital, the idea of building or expanding a hospital in a small town or village does not offer much encouragement.

Telemedicine provides doctors with a way to support people who hail from such marginalized societies and may not be able to be treated otherwise. It’s a great omen that the union government has finally taken initiative to develop a telemedicine service – e-Sanjeevani , which helps healthcare practitioners to broaden their spectrum to cover from the small areas around a district or state hospital to the entire state and beyond with the help of technology.

Along the way, the platform has evolved and has done several milestone accomplishments recently and still continues to do so. With Andhra Pradesh as the first state to receive e-Sanjeevani AB-HWC services, it has successfully completed over 1000 hubs and 15,000 spokes across the many states and has completed close to 900,000 consultations. On the other hand, the latter, that is, e-SanjeevaniOPD, served more than 21,00,000 patients during the early stages of the pandemic, while other OPDs were shut down during the lockdown. In terms of providing consultations, the duo has made a huge difference.

After witnessing the use cases of the OPD platform, especially, a lot of Indian states are now coming forward to use its services in their own respective manner. One such case among others to be noted is in the Kerala state, which has developed OPDs on e-Sanjeevani OPD to provide services to its residents. Also, the state has made arrangements to provide the OPD health services to inmates of the Palakkad District Jail. Another case to note is, Himachal Pradesh, which has also taken this initiative under its wing, has set up facilities of the OPD services in many of its old age homes.

Looking at the bigger picture, the OPD services platform has a wider and rapid reach across the country, where it has called for further development to deliver diverse range of specialty and super-specialty OPDs, including alternative medicine systems such as AYUSH and naturopathy.

Spreading the Wings
To sum up its deeds so far, the platform continues to stay true to its mission of reaching every individual in almost every part of the country. Taking states into account, the complete package of its services are adopted by 10 states namely, Karnataka, Tamil Nadu, Uttar Pradesh, Andhra Pradesh, Madhya Pradesh, Gujarat, Kerala, Maharashtra, Uttarkhand, and Himachal Pradesh among others. In terms of districts, the platform is said to have set up its services in about 600 districts, where Salem has 123658, Madurai has 60547, Hassan has 43995, Meerut has 35297, and Raebarelli has 34642. It was also noticed that people from tier three and four cities used the network more often.

Within a short period of time, the telemedicine’s network has not only raised consciousness about the lack of doctors and specialists at the ground level, but has also contributed to the reduction of the pressure on secondary and tertiary level hospitals. In addition, it is greatly developing India's digital health ecosystem.

Over 31,000 doctors and paramedics have been trained and use e-Sanjeevani throughout the nation, 14,000 doctors perform telemedicine on the site, and 17,000 doctors and Community Health officers use e-SanjeevaniAB-HWC. Close to 14,000 patients around the country are being treated on a regular basis. Speaking in the now, the platform has successfully conquered yet another one of its milestones, that is, by completing three million counsels.

End of the Line
The telemedicine platform which was officially enforced in 2009, has since been marvelously working towards the delivery of best and suitable medical services. Although the platform, during its initial days was moving at a moderate level, but now that the world is thrown into a pandemic driven scenario, e-Sanjeevani and other telemedicine services seemed to have a good reach of its services. In a country such as India, telemedicine services such as e-Sanjeevani, serve a great deal to its diverse masses and especially reaching those remote areas which find it a hassle to even access the nearest healthcare facility in their respective areas. Such services not only benefit the healthcare services, but are a great driving force that could help in the economy of a country as well.