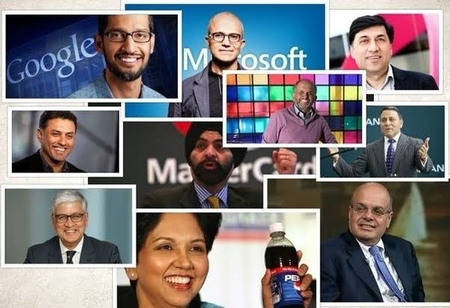 Indian CEO’s have played some of the key roles in shaping today’s business world significantly. From Goggle’s Sundar Pichai to Microsoft’s Satya Nadella, pretty much all the major multi-national companies in the world seems to have an Indian presiding over as their CEO. Here in this write-up we attempt to look at some of the profound impact Indian origin CEO’s have been making throughout the business world, and also try to dissect some of the reasons as to why major multinational companies prefer Indians in their top level executive positions.

According to a study published in the Harvard Business Review back in 2013, Indian CEO’S contributed around 30 percent share among the Fortune Global 500 companies – headquartered in

countries outside their native place. A country synonymous with hunger and poverty also seems to be producing some of the most talented and brightest minds in the business world. It is one field in which Indians are dominating its arch-rivals China. There are many reasons as to why China is fairly so poorly in this matter as compared to India. The principle reason being the education system followed in India which nurtures millions of good English speakers who are familiar with the American business model. One common point of reference between CEO’s like Sundar Pichai and Satya Nadella is that they all have pursued their higher studies abroad after their initial schooling in India.

The top Indian CEO’S have redefined the role of leadership in the business world through their innovations and drive to succeed. Sundar Pichai – The present CEO of Google since 2014, was able to reach such heights in his career from a very humble beginning in Tamil Nadu. He joined Google back in 2004, and was instrumental in steering the product management and tech innovations during the early years of the company’s reign. Sundar became an overnight sensation, and is one of the most well known CEO’S in the World.

The story behind Microsoft’s decision to elect Satya Nadella as the CEO was based on a completely different strategy. More than one third of the total workforces within Microsoft were Indians, constituting the largest nationality within the organization; hence Satya Nadella was elected due to his immense experience and also the fact that he is Indian. At present - Adobe, Google, Microsoft , IBM all these major MNC’S that are driving next generation innovations in Information Technology are being guided my Indian born CEO’s . Over the last couple of decades, Indians have become the largest exporter of world class level CEO’s in the business world. This clearly indicates that Indians are not only capable of building great companies but are also some of the best leaders in the world of business.