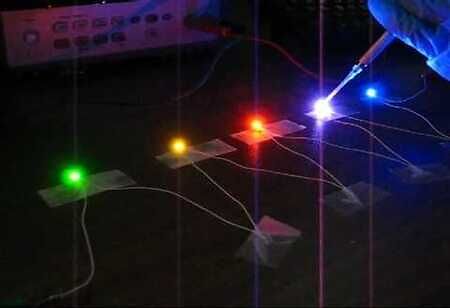 Every year, separating the grain from the husks produces about 100 million tons of rice husk waste. Scientists searching for a scalable method to fabricate quantum dots have developed a method to recycle rice husks to create the first silicon quantum dot (QD) LED light. Their new method transforms agricultural waste into state-of-the-art light-emitting diodes in a low-cost, environmentally friendly way. From televisions to solar cells to cutting-edge cancer treatment, quantum dots are beginning to exhibit their unique potential in many fields, but manufacturing them at scale would raise some environmental issues. Scientists at Japan's Hiroshima University have demonstrated a greener path forward in this area by using discarded rice husks to produce the world's first silicon quantum dot LED light.

“Since typical QDs often involve toxic material, such as cadmium, lead, or other heavy metals, environmental concerns have been frequently deliberated when using nanomaterials. Our proposed process and fabrication method for QDs minimizes these concerns,” says Ken-ichi Saitow, lead study author and a professor of chemistry at Hiroshima University.

Silica Content in Rice Husk and How Can We Extract?
Since porous silicon (Si) was discovered in the 1950s, scientists have explored its uses in applications in lithium-ion batteries, luminescent materials, biomedical sensors, and drug delivery systems. Non-toxic and found abundantly in nature, Si has photoluminescence properties stemming from its microscopic (quantum-sized) dot structures that serve as semiconductors.

Aware of the environmental concerns surrounding the current quantum dots, the researchers set out to find a new method for fabricating quantum dots that has a positive environmental impact. Waste rice husks, it turns out, are an excellent source of high-purity silica (SiO2) and value-added Si powder.

this is the first research to develop an LED from waste rice husks; the non-toxic quality of silicon makes them an attractive alternative to current semiconducting quantum dots available today

The team of scientists from Hiroshima University used a combination of milling, heat treatments, and chemical etching to process the rice husk silica: First, they milled rice husks and extracted silica (SiO2) powders by burning off organic compounds of milled rice husks. Second, they heated the resulting silica powder in an electric furnace to obtain Si powders via a reduction reaction. Third, the product was a purified Si powder that was further reduced to three nanometers in size by chemical etching. Finally, its surface was chemically functionalized for high chemical stability and dispersivity in the solvent. With 3nm crystalline particles, it produces SiQDs that are luminescent in the orange-red range with a high luminescence efficiency of over 20 percent.

According to Saitow, “this is the first research to develop an LED from waste rice husks; the non-toxic quality of silicon makes them an attractive alternative to current semiconducting quantum dots available today. The present method becomes a noble method for developing environmentally friendly quantum dot LEDs from natural products.”

The LEDs were assembled as a series of material layers. An indium-tin-oxide (ITO) glass substrate was the LED anode; it is a good conductor of electricity while sufficiently transparent for light emission. Additional layers were spin-coated onto the ITO glass, including the layer of SiQDs. The material was capped with an aluminum film cathode.

By synthesizing high-yield SiQDs from rich husks and dispersing them in organic solvents, it is possible that one day these processes could be implemented on a large scale, like other high-yield chemical processes.

Hiroshima university scientists' next steps include developing higher efficiency luminescence in the SiQDs and the LEDs. They will also explore the possibility of producing SiQD LEDs other than the orange-red color they have just created. The scientists suggest that the method they have developed could be applied to other plants, such as sugar cane bamboo, wheat, barley, or grasses that contain SiO2. These natural products and their wastes might hold the potential for being transformed into non-toxic optoelectronic devices. Eventually, the scientists would like to see the commercialization of this eco-friendly approach to creating luminescent devices from rice husk waste.

How does Myanmar Use Rice Husk as Fuel for Steam Engines?
Myanmar produces more than 13 million tons of rice per annum that is approximately half of the country’s arable land. Totally 2.6 million tons of rice husks is produced and is used or disposed annually. While it was earlier an enormous process to get rid of this voluminous waste, for the last 15 years, it has been put to use in a few limited ways. However, with more research and the numerous uses being discovered for this silica-rich material, Myanmar stands to benefit even as it accepts technical know-how from countries like Japan and Thailand.

Rice Husk is widely used as fuel for steam engines in rice mills with belt transmissions since 100 years. This serves as excellent fuel at reasonable rates, and rice husk gasifiers are drawing attention since they can carry out small applications between 10 and 200 kilowatts when combined with an internal combustion engine to drive a generator. In a country where electrification is only around 26 percent, these gasifiers can be the complete power sources for villages where electrification is a distant dream.

Rice Husk in Steel Industry
Rice husk is used while manufacturing high-quality flat steel. The ash is an excellent insulator with fine insulating properties such as low thermal conductivity, a high melting point, low bulk density, and high porosity. It is used as 'tundish powder' to insulate the tundish container, prevent rapid steel cooling, and ensure uniform solidification in the moulding process. Rice husk is also used as a coating over the molten metal in the tundish and in the ladle, which acts as a very good insulator and does not allow quick cooling of metal.

Rice Husk as Silica Source?
Extraction of silica is economical as the ash contains abundant amount of silica in it. Silica is also precipitated in customized forms to meet the requirements of various uses. Some of the uses of silica are in the rubber industry as a emphasizing agent, in cosmetics, in toothpaste as a cleansing agent, and in the food industry as an anti-caking agent; there is a growing demand for fine amorphous silica in the production of high-performance cement and concrete, use in bridges, marine environments.