Scope of Drone Surveillance: A Flight across Limits 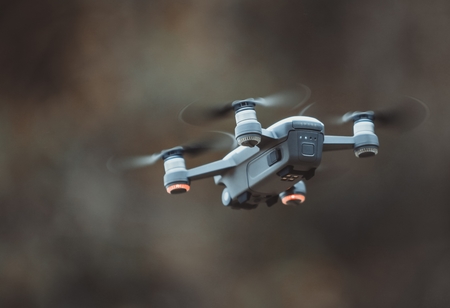 What was once an inaccessible device-drone has now emerged as a novel appliance that can be used at various dangerous zones as well as for commercial purposes. In tandem with its rise among different applications across industries, drone technology has also marked a niche in surveillance capabilities. Therefore, the technology has enveloped drone surveillance applications in law enforcement, geospatial use cases, weather forecasting, and even vacuuming up ocean waste.
Lets’ look into some of the applications of drone technology including, but not limited to, the aforementioned sections and the future of drone surveillance as well.

Assisting the GIS professionals
Identifying and presenting geographic or spatial data using the Geographic Information System (GIS) has made the life of experts easier as the measurements of latitude and longitude coordinates, availability of areal and satellite imagery, and manual digitization of maps can be availed easily. Meanwhile, GIS professionals have also identified the enormous opportunities that drone surveillance flights can assure.

Drones can be widely deployed to capture areal data with its sensors such as RGB or multispectral cameras, or LIDAR payloads. This helps in reducing field time and comes cost-effective since there is

less manpower and use of PPK geo-tagging (Post-Processed Kinematics) which eliminates the need of GCPs. Another major provision is the accurate and exhaustive data is churns out by developing aerial images that could simplify topographic surveys for land management and planning.

Defense Front
For over a decade, drones of varying sizes have been used by the military. The DRDO Rustom was a UAV developed for India’s three services- India Army, Indian Navy, and the Indian Air Force. Many of the drones are being built for the sole purpose of carrying out surveillance programs under areas of huge risks. Some of the benefits of drones in law enforcement are undertaking mass surveillance, investigation over crimes, executing rescue operations, and many more. There has been an increase in the use of drones in police departments, where they deploy more than one drone to produce 3 dimensional images.

Many nations across the world are using drones to patrol borders, and is on the verge to adopt drones that can carry out facial recognition capabilities.

The Ocean Plastic Problem and AI as it Solution
In layman terms, drones are enablers. They are a bridge to accomplish specific goals such as supplying of medicines, combat animal poaching, and also address critical problems with ocean plastic pollution. Having drones integrated with artificial intelligence that recognizes patterns, they have been leveraged to not mistaken seaweed and other vertebrates with plastic. Peter Kohler, a drone enthusiast, has come up with a Plastic Tide Project, which involves drones that fly across coastlines and oceans to spot plastic waste so that people can plunge into their cleaning efforts.

The drone industry has witnessed a rapid expansion in the last couple of years, and increased use of UAVs across sectors such as agriculture, mining, construction, resource identification and surveying. Looking forward to the future, drone surveillance business is likely to get a boost in its demands and deployment across different sectors. According to a study of UnearthInsight, it predicts that the Indian market of drones at the commercial end use is expected to mark USD 1 billion by 2020. In the near future, let’s expect that drone-based solutions will be explored across various industries in both commercial as well as non-commercial sectors.