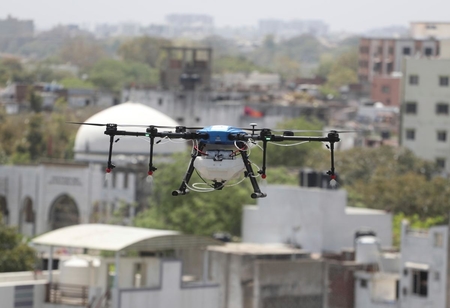 Despite a fatal virus situation befallen on humanity, violence and corruption seems to know no bounds as it continually wreaks havoc and disrupts peace especially during elections, large gatherings, and the like in India’s many political and religious events. Khaki colored uniforms, shining star badges, poles, are now given a new attire that appear to keep violence and corruption at bay and these are AI-enabled cameras, face recognition, drones and other high-end technologies.

Government, police and other law and order forms are now attempting to maintain peace and harmony using the latest technologies. With that said, here are major instances where tech seems to be having the upper hand in helping the country’s defense sector to keep corruption and violence at bay.

Bihar Leverages on AI Analytics for Free and Fair Panchayat Polls
During the ongoing panchayat elections in Bihar, the state election commission analyzed CCTV footage from counting booths using video analytics and optical character recognition (OCR). The goal is to verify that every vote cast in electronic voting machines (EVMs) is free of errors and is not tampered with during the counting process.

Staqu, a Gurugram-based artificial intelligence (AI) startup, offered the video analytics technology used for the panchayat elections. The system is built on JARVIS, a company-developed video analytics tool that employs OCR and text recognition to identify candidates and count votes directly from the camera feed by watching the EVM screens.

If a difference in the number of votes is discovered, the commission is immediately notified. This is the first time video analytics has been utilized to tally votes in an Indian election. A fingerprint recognition system has also been used by the State Election Commission to verify voter identity.

"We have a high number of polling booths and candidates, so panchayat elections are always a big deal." We felt it was appropriate to automate the vote-counting verification procedure given the number of candidates and panchayats we receive in each election," said Deepak Prasad, Bihar state election commissioner.

"We are delighted to partner with Staqu's artificial intelligence-driven JARVIS technology, which can help with the process and ensure that it is error-free and that the elections are conducted fairly," he added.

“We've asked district magistrates to make sure a JARVIS-connected camera is positioned on the same table as the EVM and is facing and detecting the machine. Then we double-check that it's recognizing text in the machine and that the OCR is correctly identifying the characters and their meaning," said Atul Rai, Staqu's CEO and co-founder.

He went on to say that the main point was to resolve any potential for discrepancy during the counting without having to interact with the EVM.

In 2019, the Uttar Pradesh government used JARVIS to monitor prisoners across 70 prisons, thanks to its face recognition and intelligent surveillance capabilities.

AI Spies Those Not Wearing Masks at Kumbh Mela
With swarms of people flocking over Haridwar for the Kumbh mela amid a spike in Covid cases, the Uttarakhand Police is employing artificial intelligence (AI) to focus on those who are not wearing masks.

Over 350 CCTV cameras have been put across the mela area, with about 100 of them equipped with sensors that trigger an alert when the camera takes an image of someone who is not wearing a mask. The AI-equipped cameras, which were originally installed at the Kumbh mela in Haridwar, also create an alarm when places deemed as prone to stampede namely Har-ki-Pauri, Subhash ghat, Brahmakund, and Malviya Dweep which show a higher crowd density.

The cameras are also used to keep track of vehicles in parking lots and to identify items that have been left unattended for more than 10 minutes.

If one of the cameras detects someone without a mask, it sends an alert to officers stationed at the Mela Bhawan police surveillance control center near Har Ki Pauri, who share the violator's location with the nearest enforcement teams. Aside from a free mask, the individual receives punishment in accordance with the guidelines.

There are 278 fixed cameras and 22 pan-tilt-zoom cameras among the 350 total. For automatic number plate recognition, ten cameras have been mounted at access points.

Sanjay Gunjyal, the IG of the Kumbh Mela, claimed that using AI-enabled cameras to monitor mela regions had been effective this Covid season.

“When a vulnerable site becomes overcrowded beyond 75% of its capacity, the control room receives an alarm, and admission to these sites is promptly halted”, Mukesh Thakur, Additional SP in charge of the Police Surveillance Control Room at Kumbh, stated.

“During the first shahi snan, a testing of these cameras with AI capabilities was conducted." It will now be utilized for the duration of the Kumbh Mela”, he added.

Facial Recognition Tech Uncovers Identity of Rioters
Amit Shah, India's home minister, said law enforcement agencies used a facial recognition system and fed it images from government-issued identity cards, driving licenses, and other databases to identify alleged perpetrators in the communal violence in northeast Delhi on February 25 and 26. This is the first admission of its kind in the country.

"This is a piece of software." Faith isn't something it notices. It is oblivious to clothing. "It only sees the face, and the person is caught through the face," Shah explained.

The admission also highlights how the Indian government has hustled to implement facial recognition technology in the lack of regulation. Before deploying the technology, critics have urged the government to hold consultations and draft legislation.

The Delhi Police first acquired the facial recognition system that the government now uses to detect missing children. According to the group, the system had a one percent accuracy rate in 2019 and couldn't tell the difference between boys and girls.

“All of this is being done without any clear underlying legal authorization and is clearly in breach of the Right to Privacy judgment. Facial recognition technology is still evolving, and the hazards of using such evolving technology in law enforcement are significant”, said Apar Gupta, executive director, IFF.