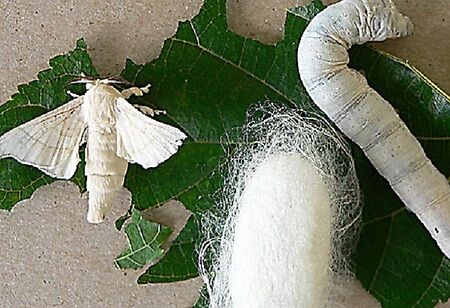 The cocoon market in Sidlaghatta, a village near Devanahalli, will be overwhelming for first-time visitors. It is said to be the largest in Asia, overtaking the one in Ramanagara. The market, which comprises a series of cavernous halls—each filled with hundreds of large metal trays piled with cocoons, the market smells of cocoons and commerce. People move through the maze of trays like a swarm of bees, stopping at each tray for a fast and furious auction. The price of one kilo of cocoon often increases to Rs. 360 from 320 in the bid.

The cultured cocoons are then moved into the further stages of production called silk reeling. In Sidlaghatta, the transportation of cocoons to reelers is the exclusive preserve of a union of cyclists. We can see these blue-shirted men cycling around town, bent under the weight of the huge bales of cocoons they carry on their heads. Each bale weighs an astonishing 30-50kg. This ecosystem in the down south, in fact, is one of the pillars of the Indian silk industry, which is catching its breath after the pandemic.

Statistically, the total raw silk production in the country during 2020-21 was 33,739 MT, which was 5.8 percent lesser than the production achieved during the previous year, 2019-20, which is marked by around 86.5 percent of target achievement received against the annual silk production target for the year 2020-21.

almost all sericulture activities are carried out by women in her native, except for cutting mulberry leaves and pruning, etc. Women laborers almost exclusively handle certain activities like weeding, leaf harvest, and silk reeling

Sericulture as Occupation
However, the market for silk has been growing steadily over the years. Many in the rural area, especially people from the outskirts of Bangalore, consider sericulture as an occupation. Manjanna, a sericulturist in a village near Devanahalli, which is about 40kms from Bengaluru, is one among them. He runs a grain factory that produces silkworm eggs. He has been running the sericulture business for the past 22 years. According to Manjanna, an ingenious solution to maintain the optimum temperature for sericulture is to hang a few terracotta pots filled with water from the ceiling.

Sericulture is Creating Employment Opportunities for the Women in Rural Areas
Make no mistake; Sericulture created employment opportunities not only for men. Even women of rural areas depend on sericulture for income. They consider sericulture a family-based business. In truth, since the tradition and the cultural contexts are not allowing women in some rural parts of India to work outdoors, sericulture is a boon. Women’s precision and patience make their presence all the more important in silkworm handling. Silkworm rearing calls for intensive attention and a mother’s care, especially for the larva stage.

According to Sandhya Rani, a sericulturist from Bengaluru rural, almost all sericulture activities are carried out by women in her native, except for cutting mulberry leaves and pruning, etc. Women laborers almost exclusively handle certain activities like weeding, leaf harvest, and silk reeling. As per her calculation, more than 2500 women's work days are created in all sericulture activities from one hectare of irrigated mulberry area per annum out of 4225 working days. During the first years of establishment, it generated about 5.8 work years for women out of a total of 9.5 work years per hectare under irrigated conditions. On the other hand, after the establishment, under irrigated mulberry (third year onwards), 7.0 work years were generated for women out of a total of 11.5 work years. Thus, female dominance in the workforce as well as in employment generation is an intrinsic characteristic of sericulture activities.

Labor was one of the components used at a lower rate than the traditional farms at -6.56 percent. Analyzing the structural breakthrough in silk cocoon production revealed that the new technology's contribution was significant. The total gain in production due to the shift from old methodologies to new technologies was found to be 28.58 percent, mainly due to the difference in the levels of input use.

Raghu D, a resident of Sarjapur in Bangalore, Karnataka, is an enthusiastic sericulture farmer. His farm is involved in the end-to-end process, including rearing silkworms and producing silk. From 2011 up until the past year, Raghu had been following traditional methods and was selling silk in the market located in Kolar and Ramanagara, around 50-70 km away from his native area. In recent years, he started to employ some of the technological interventions on his farm that helped him to increase the yield by 25 percent while reducing the investment cost. He was able to make a healthy profit with the help of Reshamandi, a startup that helps sericulture farmers improve the yield and quality of silk using artificial intelligence, cloud platforms, and IoT sensors—all boxed in a portable device. These technological interventions have helped 5,500 farmers across Karnataka increase their income by almost 30 percent and ensure steady profits from the market.