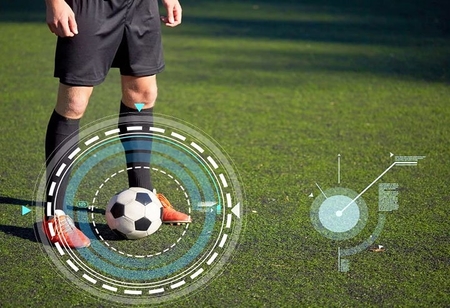 Humanity will soon have to bid adieu to sports, as the entire sports universe is coming to a finish.

As technology is bringing in a new era in sports that is changing everything right from the way athletes trained, sports are conducted, media covering sports, to the way diehard fans watch sports on their TV.

In fact, only weeks ago the first ever Olympic Virtual Series (OVS) were conducted for five physical sports namely motorsport, cycling, sailing, rowing and baseball, which also included esport games. Those aside, tech companies and sports league companies are joining hands to enhance digitalization in sports, with one being Microsoft's partnership with LaLiga to shape digital sports experience worldwide. Such events help boost a positive growth for the sports technology market which is predicted to reach $ 40.2 billion by 2026 at a CAGR of 17.5 percent between 2021 to 2026.

As technologies like AI, ML, Blockchain and others are key components helping make better evaluations, collect data, and even help in making decisions among others. Much of the change that is already happening, 5G, on the other hand, is predicted to bring major changes like never before sports experience. Here are the current tech trends changing the way sports function.

Aspiring athletes can learn from instructors through Virtual Reality (VR) or holographic technologies, with feedback offered through data collected from wearables, thanks to 5G's ultra-low latency.

Hawk-Eye's Eye Spares None
Known for its cameras spying every part of the field, the hawk-eye essentially gives an eagle eye point of view to investigate the movements of an object being used in the sport events. Hawk-Eye triangulates the position of the ball in flight by employing six high-speed cameras set 60 degrees apart on the stadium roof. It also includes a suite of technologies such as wagon wheel, pitch mapping, six trackers, and ultra edge, in addition to tracking targets. These are used to examine judgments and provide a complete picture of the match.

The technology was developed by UK based organization which is also called Hawk-Eye and is known for being used in major sports like football, cricket, rugby, lawn tennis, badminton and others. It is also known for being used in tracking missiles and brain surgery. Hawk-Eye technology has proven to be more accurate than the eye of a judge. Hawk-Eye technology helps match officials to make a judgement without making a mistake. This use of eagle eye like technology has removed the players' and spectators' uncertainty regarding the match referee's decision.

Watching Becomes Streaming
Watching sports on TV even if it’s the best LED TV out there, this experience will always be remembered for those exciting or irritable family sports viewing moments before people started to watch them on smartphones, desktops and other devices. But now streaming is on a rise. Streaming is, without a doubt, the latest way to watch sports without having to sit in front of the television. One of the most significant benefits reaped from streaming services over traditional television is the option to customize content. Users are always served appropriate content based on their preferences.

AI is a critical component in achieving a tailored experience. AI systems are always improving and learning, and they may provide relevant content by understanding the user's favorite sports, teams, and players, among other things. Voice commands and other important features are also possible thanks to AI. Viewers can use their voice to see the replay, check the score, and get updates on their favorite team and players.

Training on the Cloud
The most significant benefit is, of course, real-time data sharing. The coach does not have to always maintain spreadsheets and update athletes on a regular basis. This data is exchanged between the athlete and the trainer through the cloud, with both reviewing and commenting on the workout and its development. Since cloud computing is based on real-time, any changes made by any party are immediately reflected. The coach's and trainee's two-way communication becomes more efficient and effective. When an athlete is having trouble understanding a training module, he can communicate with his coach via the cloud. This especially helps when the coach and his or her respective athletes are in different locations and when it’s important to get certain workouts done. This technology comes in handy to access exercises or workout modules while on the go or while staying in a hotel overseas. This adaptability allows coaches to assist their athletes in a matter of minutes, even if they are not physically present.

Watch, Learn and Train with 5G
Broadcasting is, without a doubt, the most established 5G use case to date. Cameras with 5G capabilities do away with the need for cables, making it easier to cover sports that take place over a large area. Meanwhile, remote production using 5G technology allows feeds to be routed back to a central hub rather than to an outside broadcast truck. This saves money and allows production teams to work on several events in a single day, resulting in higher quality. Aspiring athletes can learn from instructors through Virtual Reality (VR) or holographic technologies, with feedback offered through data collected from wearables, thanks to 5G's ultra-low latency. Aside from that, the wireless network technology displays other uses like in-stadium, streaming, healthcare management, performance analysis and more which are yet to be discovered until it’s here.

Fan Experience Reimagined with Blockchain
The sector of sports and esports benefits greatly from blockchain technology. Blockchain, for example, is extensively utilized to reward fan participation and create one-of-a-kind experiences. Athletes can also use blockchain to crowdfund their performances by using income share agreements. In the sports sector, blockchain technology is rethinking the fan experience to enable new ways for fans to engage. Furthermore, through tokenized teams and loyalty incentive schemes, blockchain has enabled new revenue sources for teams and clubs, as well as monetizing fan involvement.

AR and VR Creating In-Stadium
While Virtual Reality (VR) enhances sports experience at home, Augmented Reality (AR) provides a stadium for fans. As a result, AR apps improve the fan experience at the stadium by offering real-time data on the players on the field, customizing each fan's seat, and reminding them where their buddy is seated. For both players and fans, VR has significantly improved the sporting atmosphere in the stadium. Human errors have been greatly decreased in virtual reality, which has the potential to drastically affect the outcome of an incident and create opportunities for fair play. AR, on the other hand, aids players in deciphering choices that they believe were made improperly by referees. AR applications are being employed in sports leagues around the world, including Major League Baseball and soccer leagues.