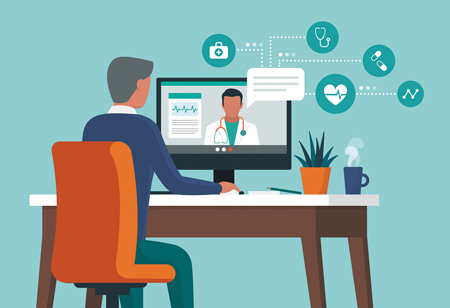 Like most fields, technology is also a harbinger when it comes to healthcare. Digital transformation in healthcare services has made treatment methods more accessible to different segments of the population. Ever since the pandemic, there has been many innovations in the healthcare field so as to exercise contactless treatment in healthcare, which in a way made virtual consultations more popular, as they helped bridge the distance between far-placed patients and quality healthcare. This proved immense relevance especially in a nation such as India which consists of several villages and remote areas where there still exist lack of awareness of modern technical solutions and services.

With a blend of Artificial Intelligence (AI) in the machines and systems, healthcare services have become more advanced, and as a result, diagnosis can be produced accurately in a quickly, less time consuming, and cost effective manner, and it hardly requires human assistance, apart from operating them or taking rational decisions. Telemedicine is not only a mere boon, but the more the country strives to bring out innovations on it, the more recognition it fetches on a global level.

At present, Apollo Hospital’s 24/7 combined with Microsoft Azure is one such example that stands strong in proving how advantageous telemedicine can be. Another example is Mfine, an online healthcare platform and the mobile app, ‘Practo’ which helps locate the nearest hospital or healthcare services are also fitting examples. With that being said, below are the top telemedicine trends in India:

Artificial Intelligence
Although there are numerous technical devices that already serve useful purposes, the addition of AI has taken treatment methods to the next level. Robotically infused devices have the capability to go several steps deeper when examining and can interpret larger amounts of data generated across online healthcare activities. They can also perform better diagnosis and provide accurate interpretations much quicker than classical healthcare devices. One of the most heard about but yet the best part is that it reduces human intervention. AI driven healthcare is just emerging in India and has already gained remarkable recognition, inspiring more hospitals across the nation to adopt these robotic intelligence in their systems and services as well.

The pandemic which still stands as a threat is one of the major reasons that brought Cloud-Enabled COVID-19 test labs.

Cloud Labs
Diseases surely require to be detected at the earliest so as to prevent it from becoming more complex and dangerous to handle. The pandemic which still stands as a threat is one of the major reasons that brought Cloud-Enabled COVID-19 test labs. According to Graham Weston, entrepreneur and investor described these labs as crucial tools required to solve the core problem of testing speed which is very important when it comes to diseases known to spread exponentially within short intervals. In India, Hewlett Packard Enterprise (HPE) has launched four of these labs and OPD centers to make quick and clean testing as well as reduce the stress on the healthcare infrastructure. Such an initiative is most likely to grow and gain wide recognition and more importantly in saving lives.

AR/VR Applications and online Consultations
Virtual Reality (VR) is a term that is most heard of than Augmented Reality (AR). Although most of us have used AR without even knowing we did, just the latter is yet to gain equal or probably more popularity than the former. AR and VR both are excellent examples of technology connecting healthcare closer to the people. And yes, they literally do that, by locating the nearest healthcare facilities, and making virtual consultations with the patient’s respective doctors, and making medicine orders online by just scanning the medicine.. This trend is surely helping people residing in remote areas or who are far away from accessing healthcare facilities. Practo, Mfine, Medlife and similar others are recent examples to quote.

Although technology has completely transformed treatment methods, it still fails to defeat certain deadly diseases and health conditions. It takes a human brain to think about what would be the safest and the right step to take at the right time. In India, Telemedicine first emerged during 1999. Based on Statista’s statistics regarding the market size of telemedicine in India is estimated to be 830 million U.S dollars in 2019 and a year before, it was estimated to be 640 million U.S dollars. Stating that there has been a rise since 2010 and is expected to grow at a Compound Annual Growth Rate (CAGR) of 31 percent from 2020 to 2025.