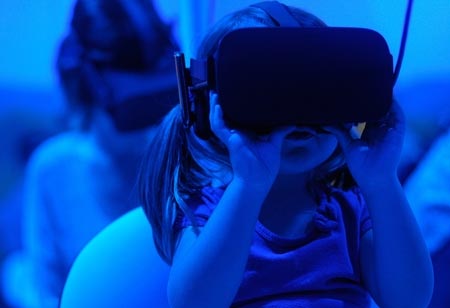 Virtual Reality Headsets attempts to provide the viewers the feeling of “being there,” it constructs a primitive association to the actions unfolding in front of the spectators. The whole body can connect and generate a sense of understanding because audience experience the action as if they are really on the set. “I think people tend to be worried about every new technology that comes along. Critics worry that if we spend time paying attention to that new kind of media or technology instead of talking to each other that that is somehow isolating. But humans are fundamentally social. So I think in reality, if a technology doesn’t actually help us socially understand each other better, it isn’t going to catch on and succeed.” says Mark Zuckerberg, when people doubted the future of Virtual reality headset and controllers .

In spite of being a technology that commenced years ago, a large number of people are still unaware with the notion of Virtual Reality headset works . Various fields such as culture, medical,

society, education and architecture are some of the fields that have already engaged with the advantages of this Virtual Reality. From influenced museum visits to the classification of a muscle, VR allows to go beyond boundaries that would otherwise be unbelievable. Tamo c-future virtual reality headset is used in different fields such as for learning, for guidance, Smartphone. Games etc. To train drones to fly faster, researchers are using virtual reality headset drones for better future. Virtual reality headset for Smartphone includes a number of high profile brands such as Google Daydream, Samsung Gear and Pansonite HMDs. In addition to this, there are more than hundreds of VR mobile headsets as well.

Here is a list of three Best VR Headsets of future

Oculus Quest: It is the foremost stand-alone headset to let full room-scale movement. This headset does not require computer or smartphone and help individual look all over the room. It has six degrees of freedom controller and functions on a snapdragon 835 systems on chip. It was launched in 2019 with a 64GB version and of 399 US dollars. With a version of 128GB was also released and priced 499 US dollars.

Oculus Go: This headset does not require a gaming console, computer or a phone to function it and it the cost is less than Oculus Quest. The headset has three degrees of motion detection, and connects directly to the Oculus Store, which means it has more than 1,000 games and apps available from the moment you boot it up. This is a great replacement for older headsets, like Gear VR, that required a smartphone to work, but it's not as fun or free as the Quest.

Sony PlayStation VR: This particular VR is the best-functioning virtual reality headset brand , and the only reason for its attracting feature is, it holds right up to a PS4. It is an OLED panel of 5.7 inch display. By the end of 2019, the Sony Play Station VR has sold among more than 5 million people all over the world.
People are concerned about future technology and innovations and VR headset will bring a change in the future technology.