Wearable Devices That Are Storming The IoT Market 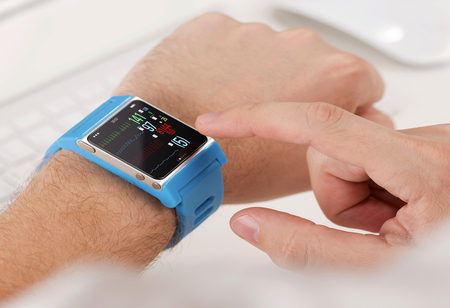 A few decades ago nobody would have imagined that everyone in the world would be carrying a palm-sized computer device called smart phone everywhere around they go. Today almost 80 percent of the world is not only carrying a Smartphone but they are also acquainting themselves with IoT based wearable devices. Advancement in research in the fields of Artificial Intelligence and Internet of Things (IoT) has led to revolutionary innovations which have led to the creation of many wearable smart devices The Wearable Technology market is valued to be around 27 billion USD in the year 2019 and it is expected to grow up to 74 billion USD by 2023, at a CAGR rate of 17 percent. Most of us would imagine smartwatches and smart glasses when we talk about Wearable Devices but there are a multitude of smart wearable devices available in the market which can upgrade our lifestyle significantly.

This article is an attempt to highlight some of the hot trending wearable smart devices out there in the market and the associated technology behind their functioning:

Gaming Simulators
Immersing one- self into the world of gaming can be a very rich and powerful experience. There are many wearable gaming devices out there that are making our gaming experience much more physical and engrossing. There are Smart Bands that allow the gamer to control the character using hand gestures. Using EMG sensors the MYO Armband

for instance measures electrical activities of our muscles with 8 sensors to detect gestures made by the hand. Every movement and gesture is carried by the sensors so that the virtual character will react the same way as the gamer does in real life.

Smart Shoes
For an athlete or player their comfort is most important. False seated shoes may lead to pain and balance problem to the athletes. Thanks to Smart Shoes embedded with sensors, all these problems can be taken care of. The sensors recognize the blood pressure of the feet and the shoe adjusts automatically. The Smart Shoes are laden with Adaptable Reaction Lacing Technology that enables the shoes to adjust according to the shape of the feet of the user. Footwear Giants such as NIKE, ADDIDAS and FILA are heavily investing on developing the most comfortable smart shoes for not only the athletes but also for the common folks.

Smart Watches
Smart Watches have come a long way since the first smart watch named Reputer was launched in June 1998 by a Japanese company named Seiko. Today smart watches are the most well known and most used smart devices among all the other wearable devices. Today Smartwatches not only enables us to track our activities ranging from tracking, swimming, running and jogging but also store information or data, connect phone calls, and even allows users to set up an SOS feature.

The Apple Watch Series 5 is one of the most trending smartwatches out there in the market. The Apple smartwatches comes with a unique ECG feature that has the ability to keep track of the user’s heart rate. Similarly the Samsung Galaxy Watch Series is gaining a lot attention in the market due to its superior navigation facilities’.

Fitness Trackers
Smart Bands or Fitness Trackers have become very popular recently, especially among health conscious people. These Smart bands or fitness trackers help track the user’s activities such as total calorie burned in a day, distance walked, and heart rate and even monitors the sleeping pattern to suggest healthy remedies. The Surge Ultimate is one such premium fitness tracker that can be used as both as a watch and as a smart band too. Apart from keeping tabs on the heart rate the Surge Ultimate also tracks the user’s sleeping patterns and shows the quality of sleep the user is getting.

The spectrum of wearable IoT based devices is not limited to the four examples of smartwatches, smart bands, smart shoes and gaming equipments but from it we can get the idea that the future of wearable smart devices is very bright, creative and thought provoking.