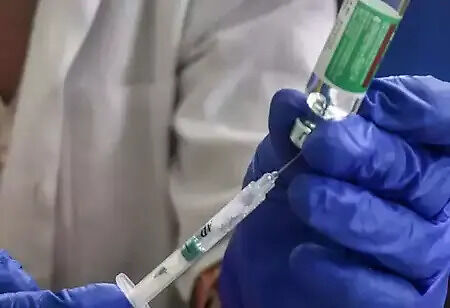 Nine months after launching the world's largest vaccination drive, India embraces a milestone of achieving one billion (100 crore) doses of the Covid-19 vaccine thanks to its governmental web portal named CoWIN for COVID-19 vaccination registration.

Vaccine doses were given out at 4,30,000 vaccination sites over the course of nine months, according to the government. Each vaccination centre had a team of 4-5 people working on it. According to the data, approximately 20,00,000 workers were employed during this critical time.

Mansukh Mandaviya, the Union Health Minister, urged everyone who is eligible to get inoculated as soon as possible and participate in the ‘historic’ feat. For the occasion, he will premiere a song by singer Kailash Kher as well as an audio-visual film at the Red Fort. Then there are also expectations about the largest national flag, weighing over 1,400 kg, to be raised at the Red Fort on this day.

India scripts history. We are witnessing the triumph of Indian science, enterprise and the collective spirit of 130 crore Indians. Congrats India on crossing 100 crore vaccinations. Gratitude to our doctors, nurses and all those who worked to achieve this feat. #VaccineCentury, tweeted PM Modi.

Currently, the talk in town is that a top Ministry of External Affairs official said that India's digital COVID-19 vaccination platform CoWIN can be customized and scaled up for global health activities. Riva Ganguly Das, the ministry's Secretary (East), further states that India is seeking to share this platform with partner countries.

"The CoWIN platform may be customized and scaled out for global health treatments. We're focusing on sharing this platform with partner countries in the interest of health cooperation and their readiness to face global health concerns”, said Das at the ASEAN-India Track 1.5 Dialogue on Cyber Issues.

As a result, the need for cooperation between India and ASEAN member countries in this area is self-evident. We have seen the critical role played by digital technologies during the COVID-19 waves in keeping supply chains open for an accelerated and sustainable economic recovery in the region”, adds Das while speaking on grounds of cybersecurity emphasizing the importance of focusing on equitable access to cyberspace and its benefits.

In appreciation over the vaccination feat, the government has further planned to trumpet the achievement to travellers belonging to the aerial, water and land based transport systems. It does not end there, in fact, the government also wants villages which have completed 100 percent vaccinations to show their sign of appreciation towards health workers by putting up posters and banners complimenting their role in the overall operation.

However, the gap between those who have been partially vaccinated and those who have been fully vaccinated is among the world's highest, raising concerns in a country where over 450,000 deaths, or 4.52 lakh, have already been reported. The government is aware of the problem and has urged states and union territories to concentrate on providing the second doses and to exchange strategies for closing the gap.

"It is a stupendous achievement for India to reach the 100 crore vaccination milestone in a record 275 days”, praises Dr. Ashutosh Raghuvanshi, MD and CEO, Fortis Healthcare.

Nitin Gadkari, Union Minister of Road Transport and Highways emphasized the commitment of the government in the battle against the deadly virus.

Prime Minister Narendra Modi congratulated India on reaching the 100 million vaccination milestone, calling it a victory of Indian science, entrepreneurship, and the collective spirit of 130 million Indians. He also praised and complemented health personnel for their contributions to the achievement.

India scripts history. We are witnessing the triumph of Indian science, enterprise and the collective spirit of 130 crore Indians. Congrats India on crossing 100 crore vaccinations. Gratitude to our doctors, nurses and all those who worked to achieve this feat. #VaccineCentury, tweeted PM Modi.