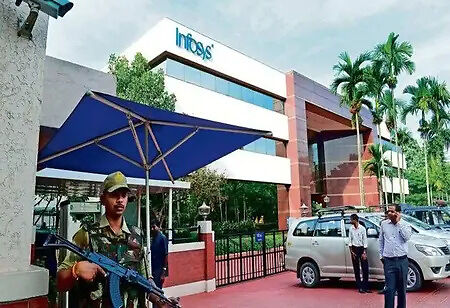 Infosys could topple Cognizant Technology Solutions Corp and can become the second largest IT firm in India by 2023 by maintaining current revenue growth. Infosys has managed to cut the revenue difference with the New Jersey-headquartered firm by half in the last two years.

The change in the striking order emphasizes the transformation at Infosys is by Chairman Nandan Nilekani and chief executive Salil Parekh. It also underlines the growth pangs faced by Cognizant, which is struggling to build a stable leadership team and deliver consistent growth under chief executive Brian Humphries.

Infosys ended with $ 4.25 billion in revenue in the October-December period, which leads 6.3 percent sequential dollar revenue growth. Cognizant, which follows a January to December financial year, expects revenue to be between $4.75 billion and $4.79 billion, translating to a $500 million difference in quarterly revenue between the two companies.

However, the faster growth by Infosys over the last two years has encouraged some analysts and industry executives to point to a change in the pecking order around the corner.

the colour for this calendar year is that the demand environment remains strong, our overall pipeline (of contracts) is the largest we have had in a very long time

Salil Parekh, chief executive,Infosys says, “the colour for this calendar year is that the demand environment remains strong, our overall pipeline (of contracts) is the largest we have had in a very long time. The number of large deals that we closed is strong (Infosys won 25 deals, each of which was more than $50 million in value). This gives us good confidence.”

If Infosys repeats a 21percent growth in the December quarter, it will translate to $5.14 billion in revenue and help it surpass Cognizant at the lower end of the guidance.