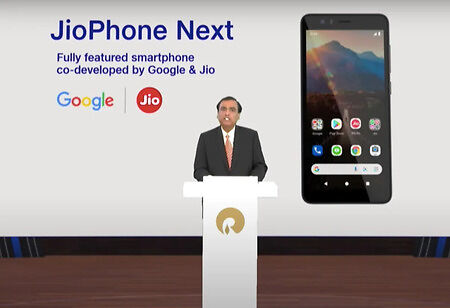 Analysts estimate that Reliance Industries Limited (RIL) plans to price its upcoming budget friendly 4G smartphone, JioPhone Next, at around Rs.4,000. It will need to spend about Rs 3,750 crore on subsidies, or 25 percent more than previously estimated, due to a global chip shortage and consequently higher prices of semiconductors and other components.

RIL may need to subsidise consumers to the tune of Rs 15,000 crore, according to IIFL Securities, if it wants to sell 75 million units at a subsidy of Rs 2,000 per unit.

Due to a worldwide chip shortage, RIL's digital business subsidiary, Jio Platforms, has postponed the launch of the JioPhone Next, which was built with Google, to around Diwali.

Chip shortage is wreaking havoc on most industries throughout the world, with India's automobile industry among those suffering the most. They serve an important role in control and memory functions in a wide range of electronic goods, including computers, cellphones, data centres, electric vehicles (EV), aircraft, supercomputers, and automobiles.

According to analysts, one of the company's biggest challenges is managing the component supply chain.

“Jio might potentially investigate a ‘buy now, pay later' program to stimulate JioPhone Next sales,” according to another analyst, “where the upfront sum could be kept low to attract value hunters with the ability to pay the balance in easy, numerous installments”.

Given India's budget sensitivity, the Google-developed smartphone has been labelled the most 'ultra inexpensive' smartphone for Indian users. While smartphone manufacturers across the world are developing 5G-ready devices, Reliance Jio opted for the 4G route, creating a phone with capabilities that fall in between Android and Playstore.

JioPhone Next comes with ground-breaking premium features including language and translation tools, a camera, and support for the most recent Android and security updates. All of these features are unheard of in such a cost-efficient smartphone.

If the chip shortage lasts another quarter, RIL may launch a limited JioPhone Next. The next step will be to launch in a few areas around Diwali, followed by a full-fledged launch once component costs have stabilized and semiconductor supply has normalized, according to the second analyst.

According to UBS Brokerage, even if Google and Jio build a lighter operating system, cost savings would be limited to a few areas such as display (about $5) and memory (approximately $4), making a $50 bill of materials (BOM), or device cost, difficult to accomplish.

“Jio might potentially investigate a ‘buy now, pay later' program to stimulate JioPhone Next sales,” according to another analyst, “where the upfront sum could be kept low to attract value hunters with the ability to pay the balance in easy, numerous installments”.