Jio Phone Next Could be the Next Big Revolution in 4G 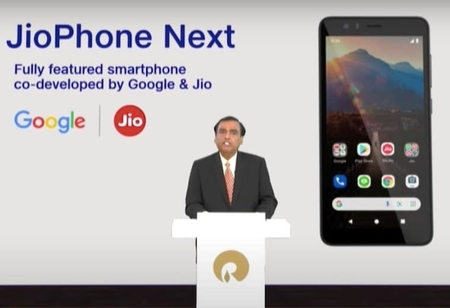 Mukesh Ambani, India’s billionaire businessman, announced the launch of the Jio Phone Next smartphone. Considering how economically conscious India is, the Google co-developed smartphone is dubbed to be the most 'ultra affordable' smartphone for Indian users. The phone will make its way into the market on September 10, on the occasion of Ganesha Chaturthi.

While smartphone companies around the globe are manufacturing 5G suitable phones, Reliance Jio chose the 4G path designing a phone with features formed at the intersection of Android and Playstore.

JioPhone Next has truly ground-breaking premium features, such as language and translation functions, a great camera, and support for the most recent Android and security upgrades. All of which are unheard of in such a reasonably affordable smartphone. However, the price is yet to be announced.

The software seems to play a big part, since Google states that the JioPhone Next's software experience would be focused on three aspects which are localization, cameras, and push for the newest Android features and security upgrades. More crucially, the software will be designed specifically for India, taking into account the demands of millions of new users who will be using the internet for the first time.

Features Aimed to Widen Internet Access Across India
The new smartphone was created to increase the number of people who have access to the internet in the rural areas and all around the country. The phone is supposed to offer a wide range of Indian regional languages to the user. The font on the screen can also be translated to the user's preferred language.

Although the entire Jio Phone Next specifications have yet to be published, the firm has stated that it would include voice assistant support, translation capabilities, and an augmented reality camera. In addition, the phone will receive the most recent Android features and security upgrades.

Jio Phone Next has a lot of potential in terms of democratizing 5G availability in India. Given the current pandemic period, this can also provide improved education from home, work from home, and leisure from home experiences in India,” Zia Askari, a telecom expert and Editor of TelecomDrive.com, pointed out

The above mentioned OS is believed to be Google’s low-powered android Go operating system.

Read Aloud and Translate Now are now OS-wide services that work with any text on a phone's screen, including web pages, apps, messages, and even photographs. Users may use their Google Assistant to provide a wonderful experience with many of the Jio apps on this device by employing App Actions. Users may also ask Google Assistant to play music from JioSaavn or check their balance on My Jio, in addition to getting the latest cricket scores and weather updates.

“Our teams have developed a unique version of Android specifically for this phone. It's designed for India and people who are getting their first taste of a smartphone", Sundar Pichai, CEO, Google.

The phone's camera module has been enhanced by Google and Jio for better photos and videos. The camera is expected to include an HDR setting that enhances photo color and dynamic range. On the back of the phone, there will be a single camera lens.

Special Data Vouchers
JioPhone users can get data vouchers from the firm. Customers who have used up their existing data allowance can use these vouchers to get more high-speed data.

Other Features
•It is said to include a Screen Reader that is compatible with all Google Play Store websites and applications.

•Most importantly, it will be a low-cost smartphone that will transform the lives of rural residents.

•It is also said to come with the capacity to read screens and websites, which will be beneficial to the visually impaired.

Airtel's Take on the 4G Phone
Airtel formally welcomed Reliance Jio's announcement. In a statement, the company stated that it supports the aim of bringing a low-cost smartphone to market.

Airtel noted that as entry-level smartphone users progress up the ladder, they move their preference to the Airtel network, calling the campaign complementary to their objective of focusing on quality customers. Our experience has shown that as customers upgrade from entry-level handsets to excellent smartphones (costing more than Rs.7,000), they exhibit a significant preference for Airtel's brand and network, the company said.

Customers who want to invest in high-quality smartphones may also take advantage of Airtel's easy financing options. Airtel also stated that it will continue to collaborate with device manufacturers to provide customers with high-quality devices. Airtel will enhance the efforts of all our ecosystem partners. Apple iPhone buyers who subscribe to the Airtel network will be able to take advantage of convenient financing options with bundled data.

Analysts' View
According to experts, the phone has the potential to create a stir in the market.

“It is predicted that this phone would be able to attract customers who like phones in the Rs.5,000-7,000 and even lower price range. Jio has already shown to be a popular choice among its customers. Customers will be enticed to migrate to this smartphone by Jio and Google's new offering, which comes with a high level of confidence. Because they largely dominate this price range, brands like Xiaomi, Realme, Lava, and Micromax may see a substantial impact from this new made-in-India competition,” said Nakul Kumar, COO and Co-Founder, Cashify.

“Today, Jio has evolved into an operator with a unique ecosystem of content and e-commerce-driven offers that can provide users with novel experiences. At the same time, the Jio Phone Next has a lot of potential in terms of democratizing 5G availability in India. Given the current pandemic period, this can also provide improved education from home, work from home, and leisure from home experiences in India,” Zia Askari, a telecom expert and Editor of TelecomDrive.com, pointed out.

Market analysts, on the other hand, point out that India has a sizable community of feature phone users. In their minds, the next phone they want to buy is a smartphone. “Jio could be looking at a substantial income opportunity if it can deliver a smartphone at a sweet spot price. Furthermore, Jio's smartphone may persuade new consumers to increase their data usage. The ARPU may fall slightly, but overall, Jio's revenue would increase,” said Alok Shende of Mumbai-based Ascentius Consulting.

Jio's partnership with Google Cloud is likely to result in an end-to-end cloud offering for Jio's 5G network and services lifecycle management. Jio's 5G service is likely to benefit from Google Cloud's expertise, as well as Jio's users' ability to access the 5G network across the country.