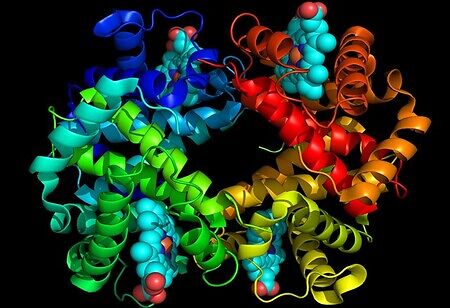 Organic molecules that combine to form proteins, named amino acids (containing basic amino groups -NH2, an acidic carboxyl group -COOH, and an R group) are the building blocks of life. The millions of processes all over the body happen because of the proteins; they act as workhorses of our body. Proteins are made using 20 different amino acids; consider that the number of combinations possible with 20 amino acids is 20n, where n=the number of amino acids in the chain. It becomes apparent that even a dipeptide made of just two amino acids joined together gives us 20n = 400 different combinations. If we calculate for a short peptide of 10 amino acids, we reach an enormous 10,240,000,000,000 combinations. Most proteins are much larger than this, making the possible number of proteins with unique amino acid sequences unimaginably huge.

The order of amino acids is known as the protein's primary structures and is ordered in the 3D. Scientists have been unable to find the protein folding issue for 50 years, but now they have come up with a new theory where they use Artificial Intelligence (AI) to detect the folding of proteins.

Artificial intelligence has changed how we look at things and how science is done by allowing researchers to analyze the massive amounts of data modern scientific instruments generate. It can find a needle in a million haystacks of information, and, using deep learning, it can learn from the data itself. AI is accelerating advances in gene hunting, medicine, drug design, and the creation of organic compounds.

Protein Folding
Proteins are present in all living organisms. They give shape and structures to the cell, catalyze reactions, transport small molecules, digest food, and do much more. They are made up of long chains of amino acids like beads on a string. But for a protein to do its job in the cell, it must twist and bend into a complex three-dimensional structure, a process called protein folding. Misfolded proteins can lead to disease.

In his chemistry Nobel acceptance speech in 1972, Christiaan Anfinsen postulated that it should be possible to calculate the three-dimensional structure of a protein from the sequence of its building blocks, the amino acids. As the amino acids have the inherent properties of a typical protein can adopt an estimated 10 to the power of 300 different forms. This is a massive number, more than the number of atoms in the universe. Still, within a millisecond, every protein in an organism will fold into its very own specific shape – the lowest-energy arrangement of all the chemical bonds that make up the protein. Change just one amino acid in the hundreds of amino acids typically found in a protein, which may misfold and no longer work.

How Could AI detects and Solve the Protein Folding Issue?
Using AI, scientists have successfully detected protein folding and identified the protein structure from its amino acid sequence. Programs such as AlphaFold2 and RoseTTAFold, discover the three-dimensional structure of proteins based on the sequence of amino acids that comprise the protein in as little as two hours and at no cost. Before AlphaFold2, researchers had to crystallize proteins and use X-ray crystallography to determine their structures, a technique that took months and cost tens of thousands of dollars per structure.

Deep learning uses algorithms, often neural networks that are trained on large amounts of data, to extract information from new data. It is very different from traditional computing with its step-by-step instructions. Instead, it learns from data. A company called DeepMind has submitted the 3D structures of virtually all proteins discovered in humans, mice, and over 20 other species in the AlphaFold Protein Structure Database.

AlphaFold 2 was not meant to predict how the proteins interact; instead, it can describe how the individual proteins assemble to build a complex unit. When we start describing fluorescent proteins, they appear in many structures. The Marine creatures such as jellyfish and coral have these proteins. Their luminescence can be utilized to illuminate and examine illnesses.

The protein data bank contains 578 fluorescent proteins, of which ten are broken and do not glow. It is extremely difficult to anticipate which proteins will react with themselves and which will not, a phenomenon known as autocatalytic posttranslational modification.

Marc Zimmer, Professor of Chemistry at Connecticut College, says, “I am a computational chemist interested in fluorescent proteins. These are proteins found in hundreds of marine organisms like jellyfish and coral. Their glow can be used to illuminate and study diseases.”

Proteins can suppress the appetite, so a protein-rich diet can help people lose weight. While conducting experiments on mice, researchers at ETH Zurich have described a new mechanism by which the building blocks of proteins, and amino acids, curb appetite. Most importantly, it involves what is known as non-essential amino acids. Researchers have come up with and have shown for the first time in a living organism that the non-essential amino acids influence the brain in a way that curbs appetite and promotes exercise.

The researchers first fed mice either a mixture of various non-essential amino acids or a sugar solution with the same amount of calories. Both groups of mice were then allowed to drink a milkshake, which they normally love. While the control group drank copious amounts of it, the mice that had been fed non-essential amino acids avoided theirs. Instead, they went around their enclosure in search of alternative sustenance.