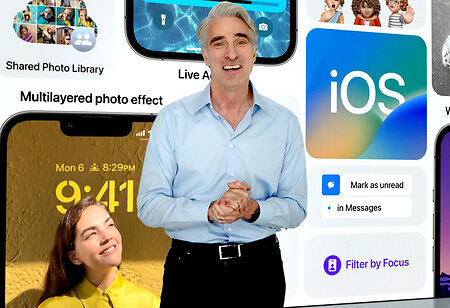 Every year, we tune into Apple’s Worldwide Developer Conference, knowing that the tech giant will drop the latest iterations of iOS, iPadOS, and many more, with CEO Tim Cook and the usual cast. However, the most exciting rumor has been about the operating system powering Apple’s mixed reality headset. Even if the headset is not ready to debut, Apple is making the software environment for it official this year.

Back to the usual stuff, here’s a list of the latest announcements by Apple at this year’s WWDC.

iPhone can be a Mac Webcam
Webcams became important during the COVID-19 pandemic. Turning iPhone into a webcam is one, but it doesn’t have to be connected to the Mac. Instead, the computer will automatically recognize the unit. Of course, this will function only if the iPhone is updated to iOS 16 and the Mac to the macOS Ventura. There’s more; this feature will allow using two cameras in the iPhone simultaneously, with one on the speaker and the other focusing on other activities.

Manage Various Car Functions with CarPlay
The latest in-car interface speaks beyond displaying the information in the iPhone but to actual hardware integration in the car. What’s more, there are different dashboards and screen sets for different cars. The customization features encompass controlling the radio, adjusting the AC, and viewing car data on fuel or speed.

Customize Away in the iOS 16’s Improved Lock Screen Support
With widget-like capabilities, users can change wallpapers, and the OS will allow them to choose between different typefaces, including color filters, while customizing their setup.

MacBook Air and MacBook Pro
The new MacBook Air is less than half an inch thick and wears four new colors: silver, space grey, starlight, and midnight. It has a larger 13.6-inch display, thinner bezel, and a tiny charger with two USB-C ports, with prices starting at $1,199 for an M2-equipped model.

The 13-inch MacBook Pro is getting an M2 upgrade, with 24GB of RAM, up to 2TB of storage, including 20 hours of battery life, and it does have a Touch Bar. Starting next month, this book will hit the markets, but the preorder can be placed priced at $1,299.

Sharing Keys and IDs in the Apple Wallet
Users can use the wallet to share their IDs for identity and age verification. The feature promises secure sharing of home, office, hotel, and car keys through messages and mail apps, and Apple users can access the same keys in their Wallet App.

At WWDC 2022, Apple showed developers how to leverage the Metal 3 and MetalFX Upscaling tools

Apple Pay Enters the Buy Now Pay Later Trend
Apple allows users to make a purchase and pay it in installments. Plus, users don’t have to worry about interests or extra fees for this system for over six weeks. Also, Apple Pay can be used everywhere with the help of the MasterCard network. Additionally, Apple is inking its bond with Shopify to device Apple Pay Order Tracking feature.

Check Out the Cost of Travelling and More with Apple Maps
Users who take public transport can check their transit updates for travel costs and transit card support in the Apple Wallet. Users will also get to check their transit card balance and be notified if there’s a low balance or needs some replenishment. Additionally, users tap on the Look Around on other apps to get a Street-view on any areas of their preference on third-party apps.

Premium Sports Coverage on Apple News
The latest update will support the My Sports section allowing the US, UK, Canada, and Australia users to receive updates on their favorite teams and leagues. Users will also be able to view scores, schedules, and standing for major professional and college leagues. The New app will also get the highlight of the matches. Besides, premium sports coverage will be entitled to Apple News+ subscribers.

Age-Appropriate Info Alert through Parental Controls
Parents will be able to manage their kids’ accounts with the latest updates to this feature. Age-appropriate restrictions will be alerted to parents for apps, movies, books, and music that their kids have access to. Kids can also request extra screen time on Messages with parents, and parents either approve or decline the requests without leaving the chats.

Safety-Check to Check out of Danger
Named Safety Check, this privacy tool helps users stay safe from domestic or intimate partner violence by quickly removing access from others. By clicking the ‘Start Emergency Reset’ users can easily sign out of the iCloud on their other devices, rest privacy permissions for all apps, stop sharing their location, and shut down messaging on all other devices, excluding the one in their hand.

Get Precise Sharing Photos on iCloud Shared Photo Library
Users can share photos with up to five other users by choosing specific photos from the Photo library or a particular range of dates. Users can choose automatically who to share specific pictures with while being clicked in the camera, thanks to a new toggle that will arrive with the iOS 16 update. Additionally, the six members who are part of an iCloud Shared Photos Library will share equal permissions to add, edit or delete their preferred images in the group.

Check how Many Calories Others Burnt in the Fitness and Health App
iPhone users will be able to set a daily Move goal in the Fitness app and track active calories to close their ring with iOS 16 — the company claims it will use motion sensors from the smartphone to estimate burned calories for the move goal by tracking steps, distance, flights climbed, and workouts from third-party apps. According to Apple, users can also share these with friends. As for the Health app, the app will be upgraded to include support for a new Meds feature, which will allow users to add and manage their ongoing medications, as well as create schedules and reminders for medications, vitamins, and supplements.

Manage Mailing with Mail
Email scheduling will be included in iOS 16's Mail app. Users will also be able to cancel the sending of an email before it reaches the inbox of the intended recipient. Users will be reminded if they neglected to attach an attachment to an email, and older emails will be resurfaced with Remind Later and Follow Up options. It's worth mentioning that competitor services and apps, like Gmail, offer similar functions.

Edit Messages
This is a feature offered on specific messaging apps, such as Telegram, allowing users to undo sending messages, as well as recall messages. This feature is also offered on apps like Signal, Instagram, and WhatsApp. Users can also mark messages as unread, allowing them to come back to a conversation at a later time, according to Apple.

New Health Tracking Features in WatchOS 9
Apple has introduced additional running stats, atrial fibrillation tracking, and prescription reminders to its health-tracking tools. WatchOS 9 has four new watch faces in addition to all of these new capabilities.

More Efficiency Added to Devices Around Smart Home
Apple has revamped its Home app, making it more efficient to control the devices in your smart home. The update adds new categories for climate, lighting, and security, as well as the ability to watch four security cameras at once.

Mac and AAA Gaming
At WWDC 2022, Apple showed developers how to leverage the Metal 3 and MetalFX Upscaling tools to improve graphics, textures, frame rates, and loading times for the M1 and M2 architectures, resulting in a seamless, immersive gaming experience for Mac customers.