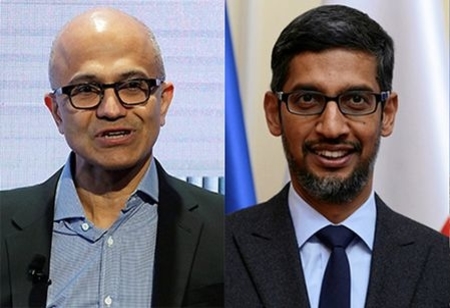 India was already proud about Sundar Pichai, an Indian’s becoming of Chief Executive Officer (CEO) to the world’s most sought-after search engine, Google LLC. But little did the country know that the man would ascend upon an even higher summit by being crowned as the CEO of Google’s parent company, Alphabet Inc. However, Pichai is not the only one whom the country cherishes; countless Indians, including Microsoft's Satya Nadella and IBM's Arvind Krishna, have taken leadership roles in many big global organizations.

Since, India is no stranger to producing individuals whose names have made it big on a global level. Not just in India, but across the globe, people of Indian origin have risen above in many fields against all odds. For the most part, these names seem to the belong to the science and tech world through the many innovations that remain glorious to this date

While it seems cool to be making headlines in top print and social media news feeds, but it’s not a cake walk, rather a Baahubali shouldering the Lingam walk, though that’s movie magic. But the context translates the same, as years of efforts, trial and error, passion and determination have shaped them to what they are today. With that said, here are five Indian origin CEOs who are forging marks on a global level.

Sundar Pichai
Pichai Sundararajan, is an Indian-American business executive who joined Google in 2004. Following the departures of Larry Page and Sergey Brin, Alphabet hired the now-promoted CEO as a management executive. Pichai is also an alumnus of the prestigious Indian Institute of Technology in Kharagpur and Stanford University in California. He was a key figure in the development of the Google Chrome browser, as well as the product lead for Google Maps, Android, and Google Drive projects, making him an Indian CEO of a major corporation.

Satya Nadella
Nadella succeeded Steve Ballmer, a long-time friend of cofounder Bill Gates, as CEO of Microsoft in 2014. Before joining Microsoft in 1992, Nadella worked for Sun Microsystems. Since taking over as CEO, he's supervised a huge shift toward cloud computing through the Azure platform and a vastly better Windows 10, which has pushed the stock price upward.

Shantanu Narayen
Narayen, like Nadella, is from Hyderabad, who joined Adobe as president and chief operating officer in 2005, and was promoted to CEO two years later. Since then, he's added 'chairman' to his list of titles. Narayen, who was named Global Indian of the Year in 2018, spearheaded the development of Adobe's cloud-based subscription model, which generates recurring revenue. Osmania University, the University of California, Berkeley, and Bowling Green State University are among the educational institutions that he studied.

"We have a lot of exciting opportunities ahead of us to help our clients accelerate their business transformation while also remaining the world leader in trusted technology stewardship," expressed Krishna.

George Kurian
George Kurian became Chairman and CEO of NetApp in June 2015 after holding various positions at companies such as Akamai Technologies and Oracle. He was born in Kerala's Kottayam district and studied engineering at the Indian Institute of Technology, Madras, before leaving six months later to attend Princeton University and earn his MBA.

Arvind Krishna
Krishna oversees IBM's business unit that provides the cloud and data platform on which the company's clients construct their futures in his present post as CEO and chairman. Krishna, a business-savvy technologist, joined IBM in 1990 and was the driving force behind the company's acquisition of Red Hat. Krishna's hiring joins a growing list of Indian-origin leaders at the leadership of some of the world's largest corporations. As the fourth Indian-born CEO of a US IT company, he joins Microsoft CEO Satya Nadella, Alphabet CEO Sundar Pichai, MasterCard CEO Ajay Banga, and Adobe CEO Shantanu Narayen.

Aside from these astonishing individuals, there are others who have proved what it takes to be at the leading front. Thus, here are a few honourable mentions.

Rajeev Suri
A Singaporean citizen who was born in Delhi, India. He is currently based in Espoo, Finland. He graduated from India's Manipal Institute of Technology with a bachelor's degree. Rajeev Suri, an Indian-Singaporean, is the CEO of Nokia, a mobile phone maker. He was previously the CEO of Nokia Solutions and Networks. He was also the CEO of Nokia Siemens Networks US LLC and a director of Stryker Corp since May 2018. He received the Macro Polo Award in 2015 and was named Finland's Business Leader of the Year in 2016.

AjayPal Singh Banga
Ajaypal Singh Banga, who was born in Pune, is the current CEO and President of MasterCard. In 2010, Ajay took over as CEO from Robert W Selander, who had been with the company since 1997. Ajay has also worked for Nestlé (India) and PepsiCo, and was the CEO of Citigroup Asia Pacific. He is also a founding trustee of the US-India Strategic Partnership Forum and co-founder of The Cyber Readiness Institute. He was appointed to the President's Advisory Committee on Trade Policy and Negotiations by former US President Barack Obama.

Jayshree Ullal
An Indian-American billionaire businesswoman, was born in London and raised in Delhi. She is the President and CEO of Arista Networks, which specializes in cloud networking. In October of 2008, she was promoted to CEO. Forbes magazine named her "One of the top five most influential people in the networking industry today" for her work at Arista Networks.

Dinesh Paliwal
The president and CEO of Harman International, a high-end audio equipment company that owns brands like JBL, Becker, and dbx. Paliwal, who was born in Agra, Uttar Pradesh, has a BE from IIT Roorkee, as well as an MS and MBA from Miami University. Prior to joining Harman, he worked for ABB Group for 22 years, most recently as President of ABB Group with responsibility for the company's global P&L and Chairman/CEO of ABB North America. He is a member of the Bristol-Myers Squibb board of directors and formerly served as the governor of China's Guangdong province's economic counsellor for three years.

As the words of Robert H Schuller goes, “tough times don’t last, but tough people do”, is most befitting to these CEOs. Most have grasped the nuances of hard work-oriented results, rational and analytical thinking, and creative ways to reduce physical labor due to their competitive upbringing. Then there are also the key ingredients, which are determination and passion, that has helped them become who they are today.