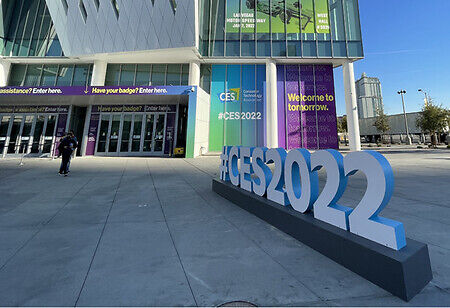 The consumer electronics show, held every year in Las Vegas, CES 2022, was roofed remotely this year due to the surge of the Omicron variant. Major technology makers relying on displays in Las Vegas and online showrooms and YouTube channels introduced their latest innovations. With the up-and-down pattern of COVID-19 over the last two years, it shouldn’t be a surprise that another badly timed surge again disrupts everything. Because of this unpredictability, the CTA from the onset went with a hybrid model and offered the option to attend in person as well as virtually through a digital platform. The great announcement from Samsung’s first QLED TV to Sony mocking its PlayStation VR2 system infused the show with relevance and excitement. The presence of the automotive industry didn’t disappoint the gatherings this year either, and the launch of Robot Cat to relieve the stress of users was one of the rare launches in CES 2022. Let look at some of the highlights of the event.

Samsung Announced New QLED TV
Samsung comes with some new QLED TV models that use mini-LED in CEs. The new series has a redesigned New Home Screen UI with many organizational improvements, an NFT Store, and the ability to hit 144Hz when connected to an Nvidia 30-series GPU. Samsung also launched a smaller line-up of MicroLED screens.

Robot Cat to Relieve Users’ Stress
Amagami Ham Ham, a robotic cat, is one of the strangest technologies at CES. The robotic cat is structured in such a way that it can nibble the finger. The technology developers approximate that there are nearly 20 different nibbling patterns designed scientifically for the users, which act as stress busters. The company has not disclosed the availability dates and price of the product is looking forward to running a crowdfunding campaign this year.

Most people like the nibbling sensation but know they need to teach their children or pets to stop it because kids and animals will otherwise bite them with full force eventually, says Tsubasa Tominaga, Yukai chief marketing officer.

BMW’s Color-Changing Car
German carmaker BMW revealed a chameleon car that changes color. The company has joined forces with the US-based E Ink, a digital paper technology company, to develop the technology. In addition to personalization, a variable exterior also contributes to the efficiency of the vehicle. By nature, a white exterior on hot days would reflect sunlight, and a black exterior on cold days would absorb the sunlight.

LG’s New Launches
A new 42-inch LG C2 puts the company’s OLED expertise to work in its smallest frame still. It offers all the same premium features like LG’s other C-series TVs, except it’s a more convenient size. Down the tiers, the new A2 and B2 OLED TVs come with a lesser price tag along with a new range of smaller QNED mini-LED TVs. LG’s WebOS has also received updates, with the new version 22 offering benefits for user profiles, a new ‘Always Ready’ ambient mode, and fresh options in the Game Optimizer menu.

LG’s built a screen tech to work in the Virtual Ride, an immersive exercise bike that lets one ride through different environments while pedaling away at home.

Bosch’s Connected and Smart Solutions Driving Growth
Bosch explained the company’s ideas about linking the Internet of Things with AI. This creates a ‘virtuous circle’ in which connected products deliver information that is processed by AI and incorporated into software updates for these products.

“We see the combination of AI and IoT as holding the key to leveraging the most user benefit from both of these technologies, besides enabling us to develop new business models; this approach helps us offer better products and solutions that deliver real added value for individuals and society as a whole.” Tanja Rueckert said.

According to Bosch, all future electronics product classes will be connectable. Sales of connected power tools, household appliances, and heating systems alone have grown by 50 percent within one year, from four million units in 2020 to more than six million last year.

Virtual reality-powered console for PlayStation 5
Sony also divulged the details of its next-generation virtual reality support for the PlayStation 5 at CES. The new console will come with an enhanced eye-tracking feature. It detects the motion of users’ eyes, so a simple look in a specific direction can create an additional input for the game character.

Hideaki Nishino, Vice President, Sony, says, “it will take the VR gaming to a whole new level, enabling a greater sense of presence and allowing players to escape into game worlds like never before. With the headset on and controllers in hand, players will feel a heightened range of sensations unlike any other. The new console allows players to interact more intuitively in new and lifelike ways, allowing for a heightened emotional response and enhanced expression that provides a new level of realism in gaming.”

The hybrid design of the chipset includes up to 6 performance cores and up to 8 efficiency cores, which, a first in an Intel chip model, brings huge improvements in performance while ensuring optimal battery consumption

Shiftal’s Move towards Metaverse
Panasonics subsidiary Shiftal designed new products to help users immerse themselves in the metaverse. The three new products launched are the MeganeX VR headset, the Pebble Feel metaverse-linked wearable heating and cooling device, and the mutalk microphone that preserves users’ voices for the metaverse while stopping sound from leaking into the surroundings. The Pebble Feel is a personal air conditioner that heats and cools the human body with a high-performance element that fits in the palm like a pebble.

Hyundai Uses Robotics to Direct Future Mobility
Hyundai Motor demonstrated its vision for robotics in the real world and metaverse under the theme ‘expanding human reach.’ Its presentations reflected how the company’s robotics business would drive the shift towards future mobility, going beyond the traditional means of transport. ‘Metamobility,’ the new concept, aims to go beyond physical movements through robotics and the metaverse to create change in the real world. By this concept, distinctions between future mobility solutions will blur through robotics technologies such as artificial intelligence and machine learning.

Intel’s 12th Gen Alder Lake Mobile Processors with Hybrid Design
The 12th Gen Alder Lake CPU first arrived last year, but it was for desktops. Intel has brought the 12th Gen H processors to laptops, making some serious claims. The hybrid design of the chipset includes up to 6 performance cores and up to 8 efficiency cores, which, a first in an Intel chip model, brings huge improvements in performance while ensuring optimal battery consumption. This is essentially an architecture that Apple uses for the M1 chipset.