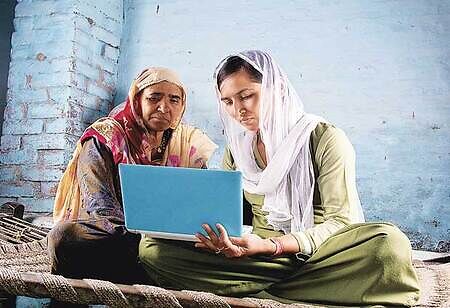 Taking social responsibility needs a big heart and creative thinking. However, taking responsibility is the responsibility of citizens, especially the leaders. The chairperson and backbone of Infosys, Smt. Sudha Murthy is an individual with a penchant for creating waves of social reform and innovation with her thoughts and actions. Her giving back to society is inspirational. For instance, she helped build more than 1000 toilets in villages across the country. She has also successfully eradicated the Devadasi system in the Raichur district through Infosys Foundation. The government has implemented several schemes to stop such practices, but they are not reaching the target communities as they should. Meanwhile, if we take the example of the people of Raigad district of Maharashtra, around 52 women were freed from courtesan or who are divorced or widows, and 15 people with disabilities receive financial support between Rs 600 to 900 every month from the State government.

Since the Digital India initiative was launched in 2015, the government has put efforts into AI implementation and digitization. AI and machine learning are being actively adopted in government services and their implementation. With the rapid advancement of AI and countries like China making steady progress in AI-based research, it is imperative that India views this technology as a critical component for development. In July 2021, PM Narendra Modi launched AI for All, a website dedicated to AI, on the occasion of the first anniversary of the National Education Policy 2020. He explained that the website would make our youth future-oriented. The government launched this initiative to create a basic understanding of AI for every citizen in the country.

Likewise, to make sure that the schemes are available for all the individuals in the country, PM Modi has launched a few digital Schemes this year during the Digital India Week 2022 in Gandhinagar in India. The main motto of the digital week was to catalyze the new India's Techade. The digital India program had a physical event from July 4 to 6th. The program celebrated the anniversary of digital India and demonstrated how digital India platforms like Adhar, digiLocker, and Cowin have made life easy. These initiatives show the global audience about India’s technological prowess and explore collaboration and business opportunities and present a techade of opportunities to the next generation.

The PM says, “In the last eight years more than 23 lakh crores has been transferred to the beneficiaries through Direct Benefit Transfers. With this technology around 2.23 lakh funds that have gone to the wrong hands are saved.”

Here are the schemes launched in Digital India Week 2022:

Digital India Bhashini Scheme and its Significance
This scheme enables internet and digital services in Indian languages, including voice-based access. This helps in creating content in Indian languages. Moreover, the scheme will focus on building AI-based language technology solutions for Indian languages along with creating multilingual datasets. According to the government, the Digital India Bhashini scheme will enable massive citizen engagement to build these datasets through a crowdsourcing initiative called BhashaDaan.

The mission will create and nurture the ecosystem involving Central/State government agencies and startups, working together to develop and deploy innovative products and services in Indian languages. The mission also aims to increase the content in Indian languages on the internet substantially in the domains of public interest, particularly, governance-and-policy, science & technology, etc.

Digital India GENESIS
Digital India GENESIS is short for Gen-next Support for Innovative Startups. The mission aims to create a National Deep-tech Startup Platform in a bid to discover, support, grow and make successful startups in tier-II and tier-III cities of India. This scheme has a total outlay of Rs.750 Crore.

Indiastack.global
Indiastack.global is a global anesthesia project that is commenced under India Stack like Aadhaar, UPI, Digilocker, Cowin Vaccination Platform, Government e-Marketplace (GeM), DIKSHA Platform, and Ayushman Bharat Digital Health Mission. This plan of India to the Global Public Digital Goods repository will help position India as the leader in building Digital Transformation projects at a population scale and prove to be of immense help to other countries looking for such technology solutions.

All the programs that are launched in the event are going to strengthen the ease of doing business and ease of living life. They will give a fillip to India's startup ecosystem. India can now proudly say that, India is not only part of the Industry 4.0 revolution but also it is leading in it

MyScheme
This mission is a service discovery platform facilitating access to Government Schemes. This mainly enables a one-stop search and discovery portal where users can find schemes that they are eligible for. Along with this scheme, PM Modi also announced the Meri Pehchaan scheme, which aims to provide a single set of credentials to multiple online applications or services.

C2S program
PM announced the first cohort of 30 institutions supported under the Chips to Startup (C2S) Program. Moreover, the C2S Program aims to train manpower in designing semiconductor chips at bachelor's, master's, and research levels and promote the growth of startups working in semiconductor design in India. It offers to mentor at the organizational level and makes available State-of-the-art facilities for design to the institutions.

The PM says, “All the programs that are launched in the event are going to strengthen the ease of doing business and ease of living life. They will give a fillip to India's startup ecosystem. India can now proudly say that, India is not only part of the Industry 4.0 revolution but also it is leading in it.”

According to the PM, FinTech's endeavor in India is truly a solution by the people, of the people, for the people. India is going to expand the future of digital technology in many sectors, including space, mapping, drones, gaming, and animation. He said that provisions like IN-SPACe and the new drone policy would give new energy to India's tech potential in the coming years. India is working on the target of taking electronics manufacturing to more than 300 billion dollars in the next three to four years. India wants to become a chip maker from a chip taker. The rapidly increasing investment will increase the production of semiconductors.