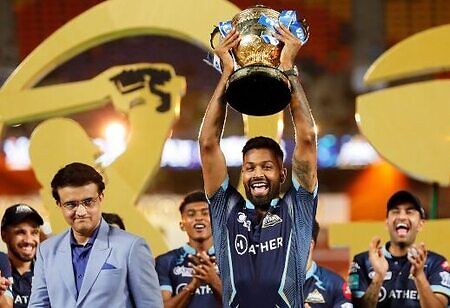 This week was flagged off with the Gujarat Titans bagging the IPL trophy, over the Rajasthan Royals, at their first attempt in the Indian Premier League (IPL). All-rounder Hardik Pandya grabbed three for 17 with medium-fast bowling against Rajasthan at 130 for nine after Sanju Samson won the toss and chose the bat. Pandya then scored 34 over 30 balls positioning Gujarat at 133 for three at 18.1 overs.

“This title is going to be a special one because we talked about creating a legacy, and the coming generations will talk about it,” said Pandya, who led his team to a seven-wicket victory over Rajasthan Royals in the final.

Catching up to the details while engaged with doing household chores or other tasks is a multitask not suited for the many. That’s why Disney+Hotstar introduced a new Audio Descriptive Commentary in Hindi that allows the audience to stay indoors to hear the derailed commentary of IPL matches as they stream. This feature is primarily for the visually impaired Disney+Hotstar users who can experience the game with the same feeling they would at a live match.

This feature is also for the elders and other audiences juggling household chores can focus on the descriptive commentary. There’s more, a slew of other technological innovations Disney+Hotstar introduced to enhance the watching experience of IPL 2022 broadcast on the network.

Disney+Hotstar has been committed to elevating the experience of Tata IPL, bringing millions of viewers closer to the game, the heroes, and the action, said Sanjog Gupta, sports - Disney Star head.

“The Star Lab has also enhanced the presentation of the tournament by deploying Augmented Reality (AR) and Virtual Reality (VR) across match coverage and programming initiatives,” stated Gupta.

“We will also interact with the world’s first interactive cricket show in the metaverse, in our ambition of making this the most interactive and immersive season of Tata IPL,” claimed Gupta.

Audio Descriptive Commentary
“By making the on-field action inclusive, through its pioneering technological innovations, Disney+ Hotstar aims to cater to under-served communities and the elderly. This will significantly increase their access to live sports so that every Indian household can partake in the excitement and fun of watching IPL,” Disney+ Hotstar said.

Users of Disney+ Hotstar may listen to audio commentary from Prasar Bharti alumni, whose trademark voices are used to narrate classic cricket matches on radio and TV. Sanjay Banerjee, Ajay Mehra, Sunil Vaidya, and Naveen Srivastava are among the commentators.

Customers with Disney+ Hotstar can turn on the new feature by going to the app's audio settings and turning on Audio Descriptive Commentary while watching an IPL match.

Earlier this month, Disney+ Hotstar claimed 50.1 million paid customers, accounting for 36 percent of the Disney+ subscriber base. In India, Disney+ Hotstar has partnered with telecom companies such as Airtel, Reliance Jio, and Vodafone Idea to offer bundled prepaid plans that include a three-month or a full-year Disney+ Hotstar subscription, depending on which plan is opted.

“With fans being allowed in the stadium, we wanted viewers to get as close to the real feel atmosphere at the venues and this is why we decided to produce the Tata IPL 2022 in Dolby Atmos for the first time”, claimed Gupta.

Online Voting and Polling Platform
The demand for participation, expression, and community among TV viewers is growing at an exponential rate. Star Sports is unveiling a new online voting and polling platform, a first for a league of the scale of the IPL on TV and Digital. It will provide a live and interactive experience that will allow fans to affect editorial dialogue during broadcasts and create a link between Star Sports' professionals and the audience. Star Sports is ecstatic about the prospect of tapping into the wisdom and passion of fans to elevate engagement.

Mixed Reality Analysis
In the 15th edition of the IPL, Star Sports will take mixed reality analysis to the next level, allowing presenters to visualize and interact with data-driven Hawkeye graphics using an MR headset, a first in sports broadcast and unique technology created in-house by Star Lab.

Enhanced Analytics
This season, commentary will be upgraded again, with improved analytics in the commentary box and commentators teleported from the ground to the studios.

“We will also interact with the world’s first interactive cricket show in the metaverse, in our ambition of making this the most interactive and immersive season of Tata IPL,” claimed Gupta.

BTS Tech Venture
The deployment of cloud production will be a new 'Behind the Scenes' tech venture in this IPL. The global chip shortage has hastened cloud workflows and dispersed production models, but they are the future of production with countless benefits for broadcasters and, eventually, audiences. By removing technology and geographical location dependencies, more resources can be allocated to developing high-quality material and narrative, and cooperation can be hastened, resulting in lower carbon emissions.

Robot Cricko
Cricko, the iconic robot statistician, will make a comeback, armed with a massive database of IPL facts and numbers to guarantee analysts have the most up-to-date and in-depth statistics to share with audiences.

With the help of the gaming engine, Disney will continue to draw power by creating virtual studios and AR graphics.