India gets the Leading Role of Meta's Metaverse Dream 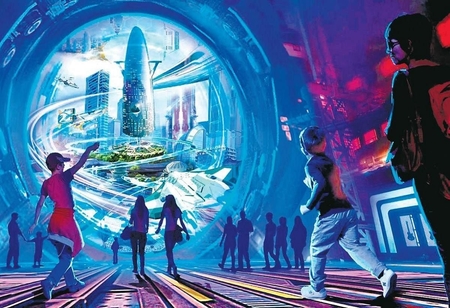 The internet’s contribution to India’s GDP went from 5.6 percent (2015-2016) to 16 percent summing up to $ 537.4 billion with $ 270.9 billion contributed by apps last year, as per the study of ICRIER (Indian Council for Research on International Economic Relations) and Broadband India Forum. This year not only are those numbers expected to surge up to $ 250 billion, but for the first time, it hopes to cross triple digits GMV (Gross Merchandise Value) as well. Behind the achievement of these results lie the collective efforts of startups, healthcare, manufacturing, fintech sectors, non-tech firms’ accelerated technological adoptions clubbed with the enthusiastic entrepreneurial growth.

What’s more, these developments attracted a competition of companies both tech and non-tech as well as investors rushing ahead of time to plant the seedlings of their objectives. The growth of this attention seems to be expanding even more and that’s not concerning, since Meta’s dreams of unravelling the Metaverse is planning to sign up India for a significant role.

That’s right, the Co-founder and CEO, Mark Zuckerberg has his hopes high on India in being a potential booster to do more than just reaching the metaverse through the exceptional skills of engineers, developers and creators. To take it further up a notch, Meta has announced plans of expanding its dream by firstly offering its aid in certain sectors it has thus far to be the key growth areas.

Meta and CBSE to Teach Virtual Reality and Augmented Reality
As part of this initiative, Meta is reaching out to the Central Board of Secondary Education (CBSE) to add a digital safety and online well-being curriculum as well as augmented reality (AR) to over 10 million students and one million educators across India for the next three years, enabling them to embrace immersive technologies.

“In order for [the metaverse] to work, this isn't going to get built by any one company or even a small number of companies -- we're going to need to empower millions of creators around the world. And that's what we're so excited about seeing here in India is the developer ecosystem, the ecosystem of individual entrepreneurs, the spirit around that is one of the things that makes India so special and is [why] I think we're going to see a huge amount of [the foundation] get built here in India”, believes Zuckerberg

Meta and CBSE will work in tandem on content creation and curriculum creation that incorporates immersive technologies, AR and VR as skill subjects for students.

“I'm really excited about this partnership and I think it's a huge opportunity to [invest in] this entrepreneurial spirit and bring some of these tools around the metaverse, AR, and training to the education system here in India”, says an optimistic Zuckerberg.

Zuckerberg believes that this partnership will open the path to invest in the “entrepreneurial spirit and bring some of these tools around the metaverse and training to the education system” in the country.

“We are investing in other growing areas like education and commerce through Unacademy and Meesho, which are important use cases as we think about the future that we are building. We want to continue to partner in all of these areas as we accelerate the development of the fundamental technologies, the social platforms, and creative tools that are going to be necessary to bring the metaverse to life”, adds Zuckerberg.

On the other hand, Zuckerberg has also taken note that the country’s gaming sector seems to be performing beyond better and has hopes on this sector as well.

"The online gaming sector has seen a lot of growth over the past few years and our investment in gaming in the country keeps growing as we look at how it is going to take shape in the metaverse,"

However, minister of state (MoS), Electronics and Information Technology Rajeev Chandrasekhar stressed about the government’s concern of having the internet remain open, trusted and safe.

“We would like the internet to be a force of good and to deliver access, equity and opportunity. But we would also be very careful about ensuring that the internet remains free and open in terms of competitive pressures. It is not dominated by some big corporate”, says Chandrasekhar.

Zuckerberg elaborated on the company's vision for metaverse safety and privacy, saying that laying out the vision early allows them to collaborate with other companies in the industry, establishes open standards for how things should evolve, and collaborate with civil society, regulators, and governments around the world on these standards.

“In order for [the metaverse] to work, this isn't going to get built by any one company or even a small number of companies -- we're going to need to empower millions of creators around the world. And that's what we're so excited about seeing here in India is the developer ecosystem, the ecosystem of individual entrepreneurs, the spirit around that is one of the things that makes India so special and is [why] I think we're going to see a huge amount of [the foundation] get built here in India”, believes Zuckerberg.

A Testing Ground
According to Vishal Shah, head of Metaverse products, India, which has been a crucial testing ground for several of Meta's (previously Facebook) products and features, might play a similar role in developing the metaverse's initiatives.

"I consider the entire metaverse ecosystem kind of rooted in the creator ecosystem and India is also a key market for that. So as we launch new things, you could expect to make them available, especially as they cut across devices and help people access them from more than just a VR headset," he said.

“India has been a key early adopter market for us for years now, whether it is in Spark AR, products like Reels, or even the small business ecosystem and what we're seeing from an entrepreneurial perspective ... which is why we invested heavily in terms of bringing new things to market because we saw so much early adoption and excitement around some of the creative tools that we were building”, said Shah, who previously served as the product head of Instagram until August 2021.

“Over the next year or two, we will continue to build VR-centric experiences, but we are also going to bring them more broadly across different devices”, he added.

Since they believe the metaverse cannot be built by a single company, Shah stated that their efforts will be based on interoperable standards. “There will be a role for other companies, creators, businesses, individual developers to really build these experiences and for people to feel like they can have continuity and move across from place to place”.