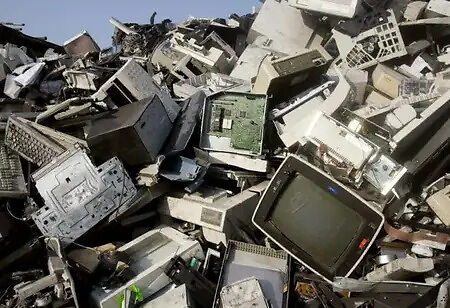 Being the second most populous country, India is now ranked as the third largest e-waste generator in the world, says UN’s Global E-Waste Monitor 2020. Yes, old feature phones with buttons that are locked away in closets for whatever purpose are one of the major e-waste products found in most households aside from laptops, computers and electrical home appliances. In its research titled 'Electronic Waste Management in India', ASSOCHAM and EY estimate that five million tonnes of e-waste will be generated in India by 2021. Computer and mobile phone equipment are the primary sources of e-waste in the country, according to the study.

Some tend to unintentionally end up accumulating e-waste due to emotional attachment to the product, while some of these products are often forgotten by their owners and end up being found during cleaning time or on a whim.

There are ways within the country to manage e-waste yet it is termed to be the most unorganized e-waste management system. But on the bright side India is known to be the only country in South Asia to have a dedicated legal framework for dealing with e-waste. The E-waste (Management and Handling) Rules cover not only the requirement for ecologically appropriate e-waste management, but also its transportation, storage, and recycling. They've also brought forward the idea of 'extended producer responsibility' (EPR).

Fortunately the circumstances seem to be improving with most large-scale manufacturers such as Sony India for instance has set forward for a ‘zero environment footprint’ goal by collecting and recycling e-waste.

As a result, in FY2019, about 2,975 tons of e-waste were collected. To add some spice to the mix, the company has enabled its customers to participate in the cause by allowing them to donate their e-waste, or used products, to the company. It intends to create a large e-waste collection network in this manner.

If not immediately, such an attempt will almost certainly result in a progressive decrease over time. Since India is known not only for its massive population, but also for accumulating a tremendous amount of waste and pollution. However, large trash hoardings are caused in part by population growth.

Ketan Patel, MD, HP India Market says that, “In India, we have established a collection takeback process for our IT goods as part of the EPR under E-waste Management Rules 2016, and are channeling the same through our e-waste management partners for ethical recycling”. HP's Planet Partners Program allows customers to return end-of-life HP equipment and supplies. MSME clients can also drop off their empty, original HP ink and toner cartridges at the local E-waste collection center, which is run by e-waste management partners.

Lenovo has also launched Lenovo Asset Recovery Services (ARS), a new set of services for business customers in India to handle end-of-life IT equipment, including equipment take-back, data destruction, refurbishment, and recycling. Joining in this e-waste management ride is ASUS, which is offering to pick up e-wastes from doorsteps for any charge.

One DoorBell Away to Pick Up those E-Wastes
ASUS, a Taiwanese technology company, has announced that it will assist Indian users in properly disposing of their e-waste by providing free home pickup.

There’s more to it, as the firm wants to execute the launch of its e-waste management initiative further and therefore it has provided a toll-free number and a microsite to submit information such as name, contact number, email, and address to arrange a pick-up session.

While it’s at it, the firm is also looking to promoting the #DiscardResponsibly campaign, which will run until October 31 and will be carried out through its retail network.

"More collaborative efforts are needed to raise awareness of this growing problem and to implement effective countermeasures backed by adequate research and training”, assures Yu.

“E-Waste is harmful to both health and the environment, therefore, with our world-class R&D lab we will channelize these technologies to micro-entrepreneurs at regional locations. But we will also encourage them to accelerate the country’s transition from a linear economy to a circular one”, says Nitin Gupta, Founder and CEO, Attero Recycling

However, there’s another firm which is already into collecting e-waste, only this time, it has set a goal of doubling its e-waste processing capacity and that is Attero Recycling.

Attero Takes a Step Further in its E-Waste Management
By the end of the year, Attero Recycling, an e-waste recycling company, plans to double its electronic waste processing capacity.

Deemed as India’s largest electronic asset management company and as the world’s most advanced Li-Ion battery recycling company plans to take this mission forward in its style. Meaning it plans to station six new plants to process e-waste as well as lithium-ion batteries by the end of year. These six plants will be planted in Karnataka, Telangana, Uttar Pradesh and Maharashtra.

On the go, it plans to add 14 more plants by next year on franchisee routes to take its processing capacity up a notch by three lakh metric tonnes. Since lithium-ion batteries mostly consist of metals, to take care of that problem, the company has the best-in-class technology which will extract nearly 99 percent of all metals from these batteries.

The company also consists a NASA-recognized technology, and with that, it plans to provide efficient, economical and easy-to-implement solutions. As a result, this will make a huge social impact, as it will dismantle recycling to micro-entrepreneurs while formalizing the informal sector. Since e-waste recycling in the informal sector involves a lot of health complications to the people who are extracting material in an unscientific manner.

To take care of such an issue, the company is also planning to employ, train and upgrade skillsets of the workers while framing capacities of the sector in dismantling and segregating various kinds of e-waste.

“E-Waste is harmful to both health and the environment, therefore, with our world-class R&D lab we will channelize these technologies to micro-entrepreneurs at regional locations. But we will also encourage them to accelerate the country’s transition from a linear economy to a circular one”, says Nitin Gupta, Founder and CEO, Attero Recycling.

“We believe that our franchisee program will make India self-reliant on crucial materials such as gold, copper, lithium, cobalt, etc., which will be extracted through sustainable means through these plants”, affirms Gupta.

Looking for Budget-Friendly Smartwatches? Here are the Best Ones Under 10,000

Confused About Which Soundbar to Buy? Here are Some for Grabs Under Rs.10,000