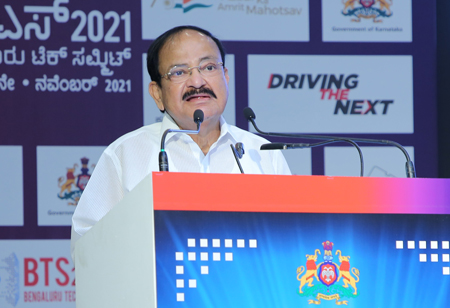 In its 24th edition carried in hybrid style, Bengaluru Tech Summit (BTS) 2021 gathers around the presence of IT professionals, technocrats, policymakers, researchers and academics from 30 different nations. Needless to say COVID-19 did breach a significant part of India’s economy, but it also paved the way for accelerated digital transformation globally. To the point the globe began combating the coronavirus with technology as its armour and of course it goes without saying how tech giants came to the rescue upon witnessing the grave scenario India was in when COVID-19 waged its war again.

But no matter how hard COVID-19 hit, tech companies, companies leveraging on technology and startups continued their run with a lot of them joining the Unicorn club of the country. As a result, Bangalore emerged as a headquarters to the Global MNCs that drive their business across nations.

As Karnataka’s Hon’ble Chief Minister puts it, “given the COVID-19 pandemic, digital transformation is now happening at an accelerated pace, making initiatives such as ‘Make in India’ and ‘Digital India’ more important than ever before”. This is certainly visible when the CoWin app acquired hope among other nations which began seeking its help to better serve its citizens in getting those shots. CoWin even achieved the one billion vaccination mark in India. But not only that, other initiatives under Digital India also gained traction this year.

Themed as ‘Driving the Next’, BTS is aiming to aid the global audience in building their future by serving them world-class innovations, new products as well as some of the greatest ideas promising to put together an interactive global tech community.

Inaugurated by the nation’s Hon’ble Vice President, Shri.Venkaiah Naidu, the ongoing edition intends to be a booster to innovation and international engagements and there’s a lot to expect from the features that were introduced this edition.

New Features
Constantly striving to support and nurture its talents, is indeed one of India’s aspects that has been the attention of international companies looking to build a branch or two of their venture in the country. On the other hand, the nation’s biotechnology, technology, information technology, and startup ecosystems are certainly on their fast track in their field of specialty helping the nation in being a major engine of innovation and growth.

"Since India's primary principle is to share and care, we should truly offer our knowledge, experiences, and new ideas and innovations. Everything should be geared toward people's enjoyment, and that should be the ultimate goal”, said Naidu.

The ongoing BTS 21 which is set for three days has unveiled events that are set for Day One which are.

Events under IT
Under this event, sessions will carry talks covering themes such as Harnessing Global Innovation, Hybrid Multi-Cloud, ESG Opportunities, and 5G and Edge Computing.

Also there are plenary speeches by Martin Schroeter, Chairman and CEO of Kyndryl, and Dr. Venki Ramakrishnan, Nobel Laureate, Group Leader, MRC Laboratory of Molecular Biology Past President, The Royal Society, on IT, entrepreneurship, biotech, and GIA.

Events under Startup
This also involves four sessions discussing topics such as Women Entrepreneurship, the Future of Fintech, Beyond Venture Capital, and the EdTech Boom.

GIA
The GIA event featured panels from Israel, Japan, Sweden, the UK, and Canada, who discussed the semiconductor roadmap for India, as well as co-creating solutions for the digital world and a sustainable future, and advancing technology and innovation.

A lot of companies that participated in the event received a number of awards for their contribution towards the nation in their style.

Shri. Scott Morrison, Hon'ble Prime Minister of Australia expressed that, “together, we’re working to bolster supply chain security, advance the deployment of secure 5G and beyond-5G networks, to combat cyber threats, and secure our critical infrastructure, and much more”.

Infosys is Awarded the ‘IT Ratna of Karnataka’ and Awards Received by Other Companies
The IT major received this award for its remarkable achievement in IT exports of more than Rs.10,000 crore. Apart from this, the 'IT Pride of Karnataka' award was handed to 20 additional firms, including Wipro, Mindtree, and TCS, by STPI (Software Technology Parks of India) and the Karnataka State Government.

While companies carried their awards, individuals such as Chimera Technologies Co-founder and CEO Padma Duraiswamy won the 'Woman Entrepreneur of the Year-IT' award. On the other hand, Standard Chartered Global Business Services won the 'High Growth in Exports- IT/ITES' award for exporting more than Rs.1000 crore and up to Rs.2000 crore.

On a side note, the Karnataka state has also been keenly working on its policies towards digital transformation in various fields through its policies.

A Look at Karnataka’s Efforts in Nurturing its IT, Biotech Sectors and Startups
The Karnataka Innovation and Technology Society (KITS) has launched a number of projects to help the state's IT and biotech sectors. The department's technology business incubators are focused at supporting innovation and work in partnership with top academic institutions.

Keeping its focus on high-quality education, cutting-edge research, and inspiring the next generation of entrepreneurs and innovators.

"Since India's primary principle is to share and care, we should truly offer our knowledge, experiences, and new ideas and innovations. Everything should be geared toward people's enjoyment, and that should be the ultimate goal”, said Naidu.