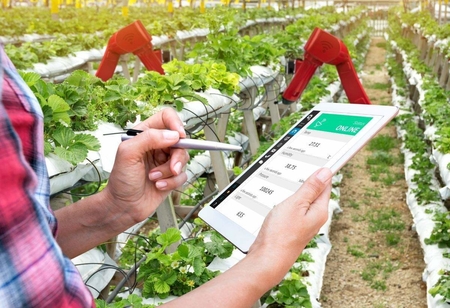 In the midst of expanding and modernizing the economy, the agricultural sector of India is still among the key contributors to the nation’s economy. With over 50 percent of agriculture’s earnings going to the nation’s wallet, as per 'inc42's India Agritech Market Landscape 2021' report, the agritech domain not only does have a massive opportunity in front, but also has the potential to influence every stakeholder.

Although COVID-19 has struck a misfortune onto the core of the business realm, where trends such as e-commerce, Work-From-Home (WFH) and online food-delivery platforms improved. Since the pandemic has kept the world indoors, the organizations are left with hardly a few options in order to survive these circumstances and digital transformation is one major pathway to those survival techniques.

Some sectors such as media and most of the entertainment industry have already shifted on the digital platform, whereas physical sectors like financial institutions, healthcare institutions, practitioners from healthcare have just flagged off their digital journey. While this has just been the kickstart towards their transformation, the same accounts to the agriculture domain, which has proven to be surprisingly stable, despite the COVID’s harsh hits.

COVID-19’s supremacy, however, has acted as a strong tailwind that escalated the adoption of technology in the farming ecosystem. This has contributed to many benefits in terms of crop growth, increased production and farming continuity. Agritech entrepreneurs has developed farmer several networks, B2B agri marketplaces, rural fintech companies, and farm-to-consumer (F2C) brands using 4G connectivity and growing smartphone penetration.

Yet, this diverse environment only accounted for a small portion of Indian agriculture, reaching less than 20 percent of the country's farmers, as per reports.

In turn, agritech is indeed a lengthy industrial revolution driven by new and pragmatic technological advancements such as data analytics. It aids in smart farming and farm management, like the services provided by start-ups like CropIn or BharatAgri, that aims to improve productivity through insights on weather and soil health, data modelling to guide optimal resource allocation and so on.

The Government's Intervention
Over the last few years, the government has provided substantial support through policy changes in order to assist farmers in modernizing and moving forward, with a focus on the agritech sector. Some stem from the government's policy support for the farmer community has led to the growth of agritech, including the establishment of 10,000 FPOs (Farmer Producer Company) to raise farmer income and upwards of 700 Krishi Vigyan Kendra, as well as 684 agritech Management Agencies for technology distribution to farmers.

The Pradhan Mantri Krishi Sinchayee Yojana (PMKSY) was also recently implemented to not only focus on water conservation but the expansion of irrigation coverage across the region as well. Additionally, the government also intends to allocate Rs. 2,000 crore ($ 270 million) to the computerization of the Primary Agricultural Credit Society (PACS), with the primary goal of assisting cooperatives through digital technology.

Moreover, agritech innovators collaborated with large corporations to expand their scope and influence. For instance, the Gurugram-based start-up MoooFarm is working with Microsoft to use Machine Learning (ML) to tackle pressing issues including mastitis, the Weather Company, a project funded by IBM's Watson Cloud Computing technology, has been providing farmers with hyperlocal weather information as well as information on soil moisture and temperature.

But on the other hand, all these policies may remain untouched or even unheard of, unless farmers are educated about them. But now with the wide usage of the internet, even rural dwellers about 60 percent are using the internet for 15-30 minutes per day, according to the ‘Indianwire’ website. Farmers are now exposed to intel such as weather warnings, common best practises and yield forecasting, among other things.

Startups' Intervention
As the saying goes: ‘big things come in small packages’. This is especially true for startup companies. Startups are proving to be the world's change agents. With new innovations and the advancement of revolutionary technology, startups are aiding the digital transformation of agriculture.

Ninjacart, among India's largest fresh produce supply chain company, uses in-house software that drive end-to-end operations, connects food producers directly with retailers, restaurants, and service providers. During the COVID lockdown last year, Ninjacart demonstrated agility and creativity by introducing a series of initiatives in a week to benefit both consumers and farmers, including apartment delivery, including a ‘Farm to Fork' pilot with Flipkart, customer delivery through food delivery apps, ‘Harvest the Farms' initiative, and more.

The same year, Walmart and the Flipkart Group announced a new round of investment in Ninjacart with an aim to ensure customers and retailers have access to high-quality fresh produce while also providing farmers with economic opportunities through the continued use of technology. Ninjacart, for its part, intends to develop its services and improve the customer experience.

Another startup, Gramophone, has been raising funds and looking for ways to solve agricultural problems through their many technological innovations. The venture inovles farmers to get a better view of the problems they face and then cooks up solutions based on artificial intelligence (AI), ML among other latest technologies available in the market.

“The Indian agriculture sector will benefit from AI's transformative capabilities by following good data practises. The Netherlands is a shining example of how AI can be used to benefit agriculture. Despite having limited arable land, the country has developed to become the world's second largest exporter of agricultural products, thanks to the use of technology and AI according to Debjani Ghosh, President, Nasscom.

The Road Ahead
AI is expected to play a key role in easing the sector's stress and catalysing the transition to data-driven farming, which will help it grow, according to a Nasscom Ernst & Young report titled ‘Leveraging AI to Optimize India's Agriculture Production.

Despite its 16 percent contribution to India's GDP, which aids in shaping the country's economy, several factors influence its performance potential, however, Nasscom reported that increased government support, growing agritech providers, a growing start-up ecosystem, and rising digital adoption among rural farming populations are providing a strong transformation impetus to the Indian agriculture sector.

“The Indian agriculture sector will benefit from AI's transformative capabilities by following good data practises. The Netherlands is a shining example of how AI can be used to benefit agriculture. Despite having limited arable land, the country has developed to become the world's second largest exporter of agricultural products, thanks to the use of technology and AI according to Debjani Ghosh, President, Nasscom.

In general, India's agritech sector has a lot of untapped potential. Agritech seems to have reached a boiling point in gaining traction with venture capitalists and government grants. Agriculture is a major industry in India's economy, and start-ups are helping farmers by digitizing the entire supply chain and incorporating emerging technology like artificial intelligence, the internet of things, Big Data analytics, and engineering developments. The introduction and implementation of openness and operational efficiencies are changing India's agricultural landscape.