Make Way for e-RUPI, India's Next Revolution in Digital Payments 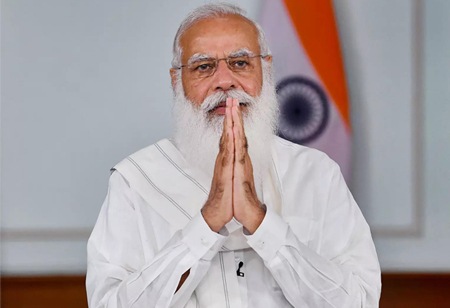 A one-time payment without any debit or credit card, mobile apps, or internet banking seem out of the ordinary, but it’s now possible with the newly introduced cashless and contactless electronic voucher, e-RUPI.

For that matter, the e-voucher is developed on the platform of National Payments Corporation of India by the Department of Financial Services, Misntry of Health & Family Welfare and the National Health Authority.

Although the idea already exists among countries such as US for instance, has a separate system of education vouchers and school vouchers, a kind of certificate that provides government funding for students.

India is also giving a shot at this endeavor given that the nation is leading in fintech and staunch practioner of techno-solutionism. Since a lot of iron work had been going on for about six to seven years under digital infrastructure and digital transactions and as a result a huge base of fintech rose. This PM remarked that such a huge fintech base is not even present in other countries.

Looking back at the dark ages, the PM recalled that some folk in India believed that technology is only for the rich and the nation is economically backward, questioning the need for technology. The discouragement also stretched among politicians, experts including the government that ardently wished upon making technology a mission.

But now the PM affirms that the nation is showing that it’s second to none when it comes to neither adopting technology nor connecting with it. In fact, when it comes down to innovations, the nation poses the ability to be on par with other big countries across the globe.

both private and public sectors will have contact any of the aforementioned banks with names of specific individuals and of course, the purpose that call for such a payment. Those beneficiaries will be identified by their mobile phone numbers, and a voucher given by a bank to a service provider in the name of a specific person will be transmitted only to that person.

The Need for Such an Endeavor
The e-RUPI is a remarkable feat in digital payments as it could most likely complete the missing parts in digital payments infrastructure and even establish a successful future for digital currencies as the hype around Bitcoin, Doge and other currencies is already very eminent. On that account, the nation’s government is burning the night oil at developing a central bank digital currency.

Since the e-voucher comes with a welfare services guaranteed tag, that not only ensures that those services are securely delivered, but it can be used for schemes under Mother and Child Welfare schemes, TB eradication program, drugs and diagnostic programs under Ayushman Bharat Pradhan Mantri Jan Arogya Yojana, fertilizer subsidies etc.

Speaking of welfare services, the e-voucher promises to delivery those services in a leak-proof manner.

It also stretches its beneficiaries to the nation’s private sector, meaning it can be used under employee welfare schemes including corporate social responsibility programs.

But both private and public sectors will have contact any of the aforementioned banks with names of specific individuals and of course, the purpose that call for such a payment. Those beneficiaries will be identified by their mobile phone numbers, and a voucher given by a bank to a service provider in the name of a specific person will be transmitted only to that person.

In actuality, e-RUPI is still backed by the existing Indian rupee as the underlying asset, and its purpose distinguishes it from virtual currencies but rather brings it closer to a voucher-based payment system.

In addition, the future viability of e-RUPI will be determined by the end-use scenarios.

What Makes e-RUPI Stand Out Among Other Digital Payments?
It first starts at, one does not require a smartphone to make payments, that’s the major difference the e-voucher makes among other digital payment methods. But it’s not just a smartphone, but netbanking, apps, credit, debit or even EMI cards for that matter. Since the e-voucher comes prepaid by nature. For instance, if there’s an e-voucher for COVID-19 vaccines, then that can be redeemed though this voucher.

On that note, it cen also be expected that there will be an option for vaccine e-voucher, where one voucher can be purchased at private hospitals and can be gifted to another individual.
All it take is sharing QR codes or the code of the card can be shared through SMS.

To top it off, there is no requirement for a card or a printed copy of the coupon to redeem these , instead a QR code is required and even that can be sent through text messages. The e-voucher is certainly adhering to those social distancing norms.

The individual purchasing those vouchers and distributing them can keep track of how they are used and beneficiaries will not be required to divulge their personal information.
In the meantime, the Reserve Bank of India is already working towards implementing a strategy for the central bank digital currency (CBDC) in a phased manner.

Phased Implementation Approach for CBDC
The Reserve Bank of India has announced that it is working on a phased implementation approach for central bank digital currency, or CBDC. CBDCs are digital versions of a country's existing fiat currency, such as the rupee, that are issued by a central bank.

CBDCs "are desired not only for the benefits they bring in payments systems, but they may also be important to protect the general public in a climate of volatile private VCs”, according to RBI deputy governor T Rabi Sankar.

While RBI governor Shaktikanta Das has previously expressed worries about crypto currencies, there appears to be a shift in sentiment on Mint Street in favor of CBDCs presently.
Although CBDCs are theoretically comparable to currency notes, their adoption would necessitate adjustments to the supporting legal framework, as the current laws are largely geared toward paper currency.

There are at least four reasons why digital currencies are projected to do well in India, according to the RBI, with one being digital payments becoming more widely accepted in the country, despite continued interest in cash usage, particularly for low-value purchases.

Thirdly, the rise of private virtual currencies like Bitcoin and Ethereum may be another reason why CBDCs are becoming more essential from a central bank's perspective.